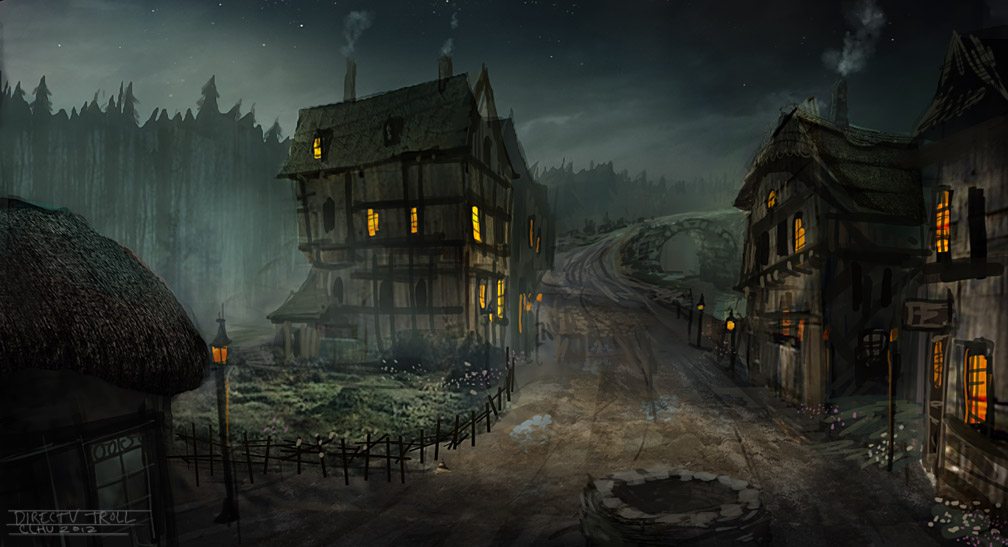 History: Long ago a king sent his brother to search the frontier of his kingdom and establish new outposts to encourage trade. The brother eventually reached a near impassable mountain range. Near its base he established a small village that was “The furthest that the king could ever hope to reach.”

Thus was the village of King’s Reach born.

Today the village is a way point for travelers and caravans who travel to the south eastern portions of the kingdom. Not many come through and traffic stops completely in the fall and winter months.

The village has a population of about 65 with only a few main buildings, to be detailed below. The rest being homesteads, farms, etc.

1. The King’s Reach Inn: The innkeeper Silas Machin runs this place with the help of his family (wife Hilda, daughter Bethel age 21, son Bartholemew age 12). The inn itself is a simple 2 story building mostly made of stone and a bit drafty in the winter. The food at the inn is typical of what you would expect: slabs of bread, wedges of a sharp cheese, stewed greens, platters of pan-fried river trout and the inn’s specialty- a roast hen cooked in beer and cream. Prices are cheap, generally 5 to 6 copper for a meal, 2 cp per tankard of drink, rooms at 4 sp, with another 1 sp per mount for stabling.

2. Hermits Home: This is the home of the hermit Chel, the townsfolk tolerate the man, even though he is insane, because he bothers no one and seems benign. In actuality Chel is a 1st level druid and his insanity does not really bother his deity. Chel maintains a peaceful existence with all around him. When no one else is watching he will use his spells to speak with the local wildlife or domesticated animals.

Note: Chel has a staff of curing with 4 charges. This is buried in the ground beneath his floor. He will only use it to aid those who have befriended him, such as the innkeeper and his family. Hilda brings him food every once in a while.

3. Store: This business/home is run by Carl Perslan, an older man with no family. Carl sells goods for the village to travelers and buys occasional supplies from the passing caravans. Items in the shop tend to be very mundane, though Carl carries some carvings made by the hermit Chel. These are all of local wild animals done in pieces of driftwood, value about 2 gp. Carl is depressed because no one will carry on after he is gone. He is looking for a wife but none in the village are of the right age or temperament.

4. The Pier: The river that runs near King’s Reach is not large enough for much boat traffic but carries trout that move upriver to spawn. The pier is the village fishing spot and the second best gathering place, after the inn. Often many of the older men and their smallest children will be here fishing in the stream and swapping stories. Further downstream you can find the women doing the family laundry.

5. The Town Well: The exact center of the town, the ancient well was the first thing that was created in the village nearly 80 years before. It shows its age but is still quite serviceable. Unknown to all, a merchant who stayed at the inn once hid some valuables in the rocks surrounding the well. He died that night seemingly from heart failure. In truth he was poisoned by an assassin, a rival had placed amongst his caravan guards. Hidden in the well is a small sack, now rotting that contains 4 small rubies, each worth 100 gold pieces, and a wand made of ebony wood and engraved with symbols, this is Fortune’s Finder.

All Other Buildings: Homes of local families.