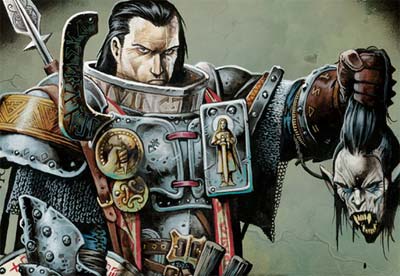 Look at the portrait above and what do you see?

Powerful warrior, strong magical armor (+4), a spear that can penetrate even the oldest of dragon hides (+3 keen), strong (18 strength), tough (17 constitution), fast (16 dexterity), intelligent (14 intelligence), overall very powerful. 10 orcs… not a problem, 10 ogres… not a problem, pashaa its just Vrock demon. Evil stands no chance vs him! So what’s wrong with this picture to most gamers? Nothing.

But I ask you is there that much enjoyment in playing this PC? Do you really have fun with this character? What defines him, his stats or his personality? How can you know if playing this character is really that fun until you attempt the other side of possibilities, playing a weak character.

I came to the realization that the most enjoyment I attained from playing a character is when he was not the strongest, nor the smartest, nor the fastest. I was so used to the character above, although not as tough, that I forgot what a real challenge was. I first experienced it when we started a new set of characters for a major campaign and was blessed with these statistics: 9, 9, 14, 7, 13,10. After 3 sets of 4d6 this was the best result. What could I possibly do with this? Who could I make? I was sadly disappointed but I played these rolls and made a cleric/magic user (in 2E days mind you). I am sure many of you think “why the hell would you want to play that PC?” I did because that’s what I rolled in 3 sets, so be it. Turns out the character was the most enjoyable one I ever played.

This PC presented the most challenges to overcome. I had to rethink how I approached monsters, cast spells, and involved myself in situations where death loomed around every corner of my 9 constitution. When I gained a level it was an incredible accomplishment of survival and strategy. Because I was not tough the game now was a real challenge and a lot more fun.

Playing the weaker PC also brings back balance to the game. Monsters of equal level have meaning. Usually battles are even and take time to resolve. One lucky blow or one failed save does not doom the PCs or monsters to a quick demise. When PCs are overpowered their opponents are equally overpowered and this creates what I call a 10/1 scenario. Where both character and villain are 10 on attack and 1 on defense. Any one luck event can completely turn the tables on the PCs or make quick work of the monster. It is unbalancing.

Magic items can also do this in a campaign. Keeping a low magic item campaign makes the game stay balanced and keeps the PCs hungry for accomplishments. Seeing the 5th +3 sword at 6th level is a commodity to be sold and exchange for that +4 sword in the shop window. Seeing the 1st +1 sword at 6th level is a holy relic to be protected and only used in times of great need vs evil.

Now I know there are many that just love power gaming and playing super characters. They love the slaughter and mayhem of claiming they killed a Balor at 8th level with their bare hands. My suggestions to DMs and players is to give normalizing PCs a shot. Don’t min max your PCs just for the sake of it. DMs, create campaigns that require skill sets to overcome obstacles not BAB. Keep the magic items and gold low. Players should find the campaign more challenging on an even 5/5 scale. DMs will enjoy themselves more because now they can throw a mental challenge to the PCs without commiting incredible monsters that in one good roll can destroy the party. This situation creates players screaming foul and DMs claiming “I got lucky”. Also DMs won’t be sour after a 2 hour preparation time only to have their elaborate challenge destroyed in 2 rounds of a warrior sword. As a DM nothing says you did a good job as watching player’s combined reactions of terror and relief after a good challenge is done.

My suggestions:
For characters roll 2 sets of 6x 4d6 and keep the best results. Players can’t lower certain scores to make others higher.

Limit the magic item power level to +1 for every 5 levels the PCs attain.

Limit permanent magic items to the PCs as to the square root of their combined levels.

Non-permanent magic items to 1 or 2 per character. This includes potions and scrolls.

Place enough gold in the campaign to allow characters to buy most, but not all things they need. By this I mean armor, good weapons, food, clothes, tools, lodging. Not magic items.

Makes potions and scrolls expensive. They are magical so why would they be cheap.

Buying permanent magic items are out of the question. They are special.