How to Play Monsters and Villains 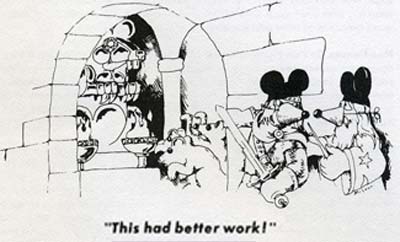 Darak and Roogo had scouted the mountain side for over 5 hours gathering information on the humanoids and their lair. They just encountered a two orc patrol and dispatched them easily. Now they had a clear view of the entrance to the orc caves.

“Odd there is only one guard to the entrance of their lair. A single dirty muscular orc from the Rock Skull clan if I read his tattoo correctly.” remarked Roogo. Darak stroked his long salt and pepper beard in deep thought. He realized that if the guard alerted those inside they would have to fight dozens of orcs. “I know what we will do Roogo. I will make an illusion to make us look and sound like the two orc patrol we just slain and we can slip by the guard. How is your orcish?” The half-elven thief nodded in agreement “Very good, I am fluent.” he said proudly. Both know the two orc patrol was due back about this time so Darak’s idea was timed perfectly.

The spell was prepared and cast. Darak and Roogo appeared exactly as the two orcs they encountered. Darak even duplicated the wretched smell they gave off of bad wine, body odor, and burnt food. Calmly both approached the entrance to the underground orc caves. The orc guard raised an eyebrow, pulled out a large flask, drank from it, and wiped his mouth on his sleeve. “Probably more of that terrible wine” Darak commented. The massive orc put away the flask and crossed his arms just as Darak and Roogo got to the large wooden frame of the entrance.

“And where do you two think you’re going?” the large orc asked. Roogo answered in orcish “Our patrol is up, we are going inside.” Short, simple, to the point Roogo thought. The large orc held out his hand to stop the two and he started laughing. “First off, Gruk wears his weapon on his left side not his right. Second Gruk uses contractions like ‘we’re’ not ‘we are’. Third Gruk has a slight limp from a leg injury he attained a week ago. Since you look like Gruk, and I noticed the inconsistency in your imitation of Gruk, I presume this is a very elaborate illusion. So I took the liberty to drink a potion to protect myself from your wizard that cast the spell. I’m guessing that’s him concentrating on the spell behind you?” The orc explained all this to a stunned Darak and Roogo as he calmed pulled out a glowing short sword from his back and mace from his side. “Also Gruk always comes in before his shift is up, that lazy orc. By the ways you don’t happen have elf blood do you? I picked up a slight elven accent in that orcish of yours, I sooo hope you are allergic to Elf Slayer, my short sword, MUHAHA…”. As the bellowing orc raises his mace to smash the two adventurers they stand there stupefied by their confrontation of superior humanoid intelligence.

Have you ever done this to players or have had this done to you? A seemingly simple monster or encounter that has unbelievable insight to a situation and defeats or hampers a party of adventurers? For a player it is very frustrating and as a DM you need to reevaluate your adventure and how you play monsters.

Why would a DM play a not so bright orc guard with such genius intuition? There are many reasons but most of the ones I have discovered are the following:

1. The DM is frustrated with the relative ease at which the party members have outwitted the adventure making it a cake walk. Now he overcompensates with the next encounter.

2. The DM is unfamiliar with the monster and misplays their intelligence and character by accident. Of course the example above is too the extreme.

3. The DM is not capable of playing a dumb monster or has trouble focusing on personality traits of a specific creature in certain situations.

As a DM you should always take the time and read a monsters tendencies, society, and combat tactics. When you have a firm grasp of how the monster behaves incorporate its intelligence into the role playing formula. This not only makes interesting situations but makes playing the monster easier. The monster has a personality and intelligence that plays itself in a certain way. It is also more entertaining playing a monster based on their personality and intellect. If the creature is a moron it can be outwitted, if it is smart you can give it insight. There will be situations where you can present the party with a seemingly easy encounter for them only to find their weak opponents are well prepared and cunning. Or a DM present a party with a greater challenge but the actual encounter is not as dangerous as it appears due to a monster’s motives and personal traits. Lets look at some examples.

A 9th level party attacking lair of Kobolds: This may seem like a simple task for such a high level party but consider the opponent and their advantages: small, cunning, trap makers, knowledge of their cave system, most leaders are sorcerers. This makes a lethal combination that PCs must overcome. A DM could now spice up the adventure making the Kobolds a fanatical self-sacrificing clan that is not afraid to die for their god. They could attack in groups with perhaps 1 or 2 of them as suicide attackers that their sole purpose is to detonate the bead from a necklace of fireballs in their hands. Now the seemingly easy task for a group of 9th levels characters has become nightmarish as any one of a dozen attacking Kobolds they run into can be holding a 10d6 bead of fiery death.

A 1st level party encountering a Kyton devil: The Kyton clearly outmatches the 1st level party with his devil immunities and damage reduction alone. But Kytons, being not too bright, like to stalk pray for hours building up fear and dread before attacking them. This could allow the party to form a defense or idea to defeat the overpowering foe while at the same time creating a sense of terror from the DM. For players this becomes a difficult horrifying challenge to overcome that brings thrill and excitement. For DMs this is a chance to role play a notorious creature to the full level of its personality instilling fear and terror into its opponents until the final confrontation. The reward for defeating and outwitting such an opponent would be appreciated by both DM and players alike.

A 7th level party encountering a 20th level necromancer and his horde of undead: While a straight up fight would end up in the slaughter of the party as a DM you need to take a look at the motives of the villain when setting up this encounter. A good scenario would be for the necromancer be on a time table and the PCs catch him in the middle of a very precise ritual. The necromancer sends his undead to deal with the party while occasionally casting a spell to aiding his minions. He is too busy completing the “Ritual of Doom” to be bothered by such inconsequential living beings. Even though the villain can stop what he is doing and take 4-5 rounds to dispose of the party with ease, the ritual and his big ego get in the way allowing the party to have a fighting chance.

Now all this does not mean you can’t have a creature that is different than the ordinary in intelligence and personality. You can have a high intelligence orc, but would he be really guarding an entrance to a cave or would he be a general or perhaps even a wizard? Unique highly intelligent creatures need to be placed in the correct situation at the opportune time. They should not be used as a matter of convenience because the party is frustrating the DM.