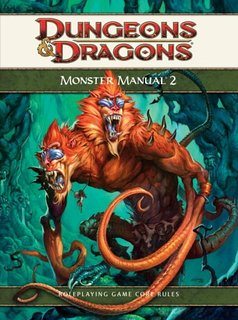 Corrections because there is no errata page…yet:

Energy Drain: On p. 8 of the Monster Manual, under Energy Drain, you should strike out the part in parentheses in the following sentence:

“For each negative level inflicted on an opponent, the draining creature heals 5 points of damage (10 on a critical hit).” Skip Williams says, “The parenthetical should be struck (it’s a leftover from an earlier draft of the rules).”

Wraiths Spawn Wraiths: WotC’s customer service indicates that a character slain by a wraith becomes a wraith, not a wight as printed in the Monster Manual.

Advancing Creatures: WotC’s Sean Reynolds passed along a correction to the Monster Manual, p. 14 at the bottom, the “Challenge Rating” paragraph under the “Example of Monster Advancement.” The long and short of it is that advanced creatures have a higher Challenge Rating and are worth more XP, as outlined on p. 102 of the DMG. Sean says the correction comes from Skip Williams:

Challenge Rating: The otyugh’s experience award increases by the same ratio as the increase in Hit Dice, and its effective CR increases +1 for each full +50% by which the Hit Dice increase. This creature grew from 6 to 15 HD, a multiplication of 2 1/2. Parties who defeat this monster receive 2 1/2 times the normal experience award. Since its HD increase +150%, its effective CR rises 3 steps from CR 4 to CR 7.

Creatures swallowed whole are considered grappled. A creature with the swallow whole special attack does not suffer any penalties for grappling creatures it has swallowed; thus it retains its Dexterity bonus to AC and can make attacks, cast spells, and threaten squares normally. If a Creature’s description of the swallow whole special attack allows swallowed creatures to cut their way free, it should say, “light piercing or slashing weapon” rather than “Small or Tiny slashing weapon.”

Scent: How long does it take for a creature with Scent find a concealed opponent’s location? It takes “a move-equivalent action” (NOT a partial action as mistakenly listed on pg. 10 of the MM) to pinpoint the direction of the creature. (Sean Reynolds)

Retriever should have fast healing, not regeneration. (Sage Advice, Dragon #283)

Celestials: Planetars and solars should have fast healing, not regeneration. They can reattach lost limbs. (Sage Advice, Dragon #283)

Kyton: Any blessed or holy weapon of +2 or better enhancement can deal normal damage to a kyton (as do fire and acid).