A Portrait of Vengeance 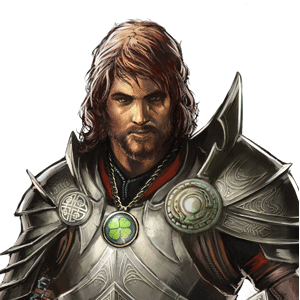 This wasn’t where he wanted to be. Jamal Hampton, Captain of the City Watch in the city of Swanlea was annoyed. Sunday mornings were supposed to be restful, quiet and (above all) spent at home. So, when one of the junior members of the City Watch came banging on his door, as though it were the end of the world, Jamal had responded rather grumpily to the lad. Jamal wasn’t usually this brusque with juniors, but today he wanted to be left alone to rest after a busy week at the Market Festival.

When the junior led him across town, to the affluent Wizard’s Quarter, he explained to Jamal that a wizard, called Armand Conway had been found dead in his apartment studio. A small collection of junior wizards and watchmen had congregated in the man’s apartment by the time Jamal got there. Jamal composed himself and politely, yet firmly requested that they leave, to give him room to conduct his enquiries. Within a few minutes, Jamal had established that Armand had been found by an understudy who’d called around for an appointment to receive some magic training. Training on a Sunday? Indeed!

The apartment was a simple affair – a studio (which was the main room), a study off to the side, a washroom, a kitchen and a small bedroom. For a senior wizard, Armand certainly led a spartan life, Jamal thought. The understudy had told Jamal that Armand had been a keen painter of portraits and life-studies – he was particularly fond of young maidens for his subjects. Typical! Jamal thought. Jamal found Armand’s corpse lying on the floor, its face in a grimace of agony. Jamal looked at the corpse. Armand wasn’t as tall as Jamal’s six-foot-two frame, but he wasn’t short, either. Jamal put his age at about fifty, despite the fact that Armand still had a full head of black hair. Armand’s brown eyes were open, lifeless and staring. Jamal shivered. Sixteen years on the job and he still hated seeing dead people with open eyes. He tore his gaze away and looked about the room.

There was a lounger near the window, with an incomplete painting on an easel nearby. The painting was of a young maiden (typically), in a pose – semi-naked with a rose in her hands. However, Jamal noted where the picture was incomplete. The rose had not been filled in. There was also a careless streak of red, running diagonally down from the middle of the picture, to its bottom right corner. Jamal asked if anyone had found the rose.

“Sorry, sir. No one thought to look.” Said a watchman, sheepishly.

Jamal knelt down and found a single red rose on the floor, near the lounger.

“Hmm … looks like he could have died before he finished painting the rose.”

“I bet the girl in the picture had a shock!” the junior quipped. Jamal nodded. Then, he looked around.

Jamal started to think. He lent over Armand’s corpse to examine it. He smelt a faint, yet distinctive smell. It was a thick, sweet smell with a sharp, almost citrus twist. Jamal recognised it in an instant.

“Poison. Blood of Nerrul, I believe it is called. Someone really wanted Armand Conway dead.”

There was a murmur from the others. Jamal looked over the corpse and noticed that the right index finger was covered in red paint. He sniffed the finger and smelt the same smell. Jamal’s brow furrowed. He looked again at the painting, then clicked – the red streak. He moved over to the painting and smelt the red streak – there it was again, the smell of the Blood of Nerrul.

“The poison was in the paint. Very clever! Let’s see if we can find the red paint pot … but, be careful, you don’t want to get near the stuff.”

Jamal and the others searched the studio and the other rooms, but to no avail. All they found was a conspicuously large splash of yellow paint, behind the lounger. Someone had taken the red paint pot. Jamal made a note of the yellow paint. He checked Armand’s right hand again. Clearly, Armand was in the habit of biting his nails.

“So, that’s how he ingested the poison. Whoever gave him the poison knew he was in the habit of biting his nails.”

“He did,” the understudy answered, “very well. I can also vouch that he wasn’t sordid with them, either.”

No one offered an answer. Jamal checked the wizard’s drawers and chests – all seemed in order and there was no missing coins. In fact, there were some valuable ornaments lying about. So, they weren’t talking about robbery. Armand was a quiet man, who kept himself to himself and never dabbled in the politics of the Wizard’s Guild – so a political killing was also ruled out. What then?

Jamal looked into Armand’s study. He regarded the scrolls, spell-books and notebooks with his watery blue eyes. Not much made sense to him. Then, he picked up and artist sketchbook and flicked through it. There were a number of well-drawn pencil sketches of various people; mostly pretty young maidens. An angry father or lover, perhaps? Jamal saw a face that looked familiar. He walked back to the painting in the studio.

When he compared the sketches to the painting, he found many of them to match the girl in the painting. Armand was keen on her! Jamal pointed this out to the others.

“We need to find out who this girl is, that’s for sure. Horrocks, get out and about and ask the neighbours who this frequent visitor was, will you?” A young watchman nodded at Jamal’s order.

Jamal continued to flick through the sketchbook. He found more disturbing pictures of a young man – the only young man in the book. The drawings depicted the young man in various reposes of death; hanging by a rope, stuck with a sword and worse, besides. Jamal frowned – it’s always the quiet ones! However, there was something about the young man’s face that was awfully familiar. He couldn’t place where he seen it before. Then, with a shiver up his spine, he realised how he recognised the man so much – the last time Jamal seen the young man, he’d been as dead as in these pictures – with his piercing ice-blue eyes staring sightlessly. One of the pictures was of the young man’s death mask exactly how Jamal had last seen him. Jamal shuddered and slammed the book shut.

“Sir,” came the voice of the watchman, “I have the name of the young girl, from one of the neighbours.”

A plump woman pushed through the crowd and gasped at the corpse. Jamal went to her and ushered her out into the morning air. Jamal asked the neighbour what she knew.

“Her name is Shannon, Shannon Holiday. She lives in the Mercantile Quarter. Lovely looking girl. She goes in Mr. Conway’s pictures for a bit of extra money. Chatty little thing and always very helpful. She’s a maid, y’know? Nothing’s too much trouble for her. She’s got a lovely smile, but sad eyes. Mind you, it’s small wonder, what with her losing her young man, last summer. Such a shame; he was gorgeous with those lovely blue eyes.”

Jamal raised an eyebrow. “Do you know where she lives?”

“Oh, yes. Just across the way, on Jubilee Street.”

“I wonder if she’d be home, with it being a Sunday.”

“I doubt it. The poor girl is more likely to be near her man’s grave on a Sunday.”

Jamal thanked the woman. He turned to his junior. “Horrocks, come with me.”

Jamal and Horrocks walked the short way to the City Cemetery. Jamal had half an idea of what was going on. All he needed to do was ask the girl the right questions. However, when they reached the Cemetery and walked over to the Peasant’s Field, they found a young girl lying next to a simple wooden headpiece, motionless.

The young girl looked so familiar to Jamal. It was Shannon Holiday, the girl in the sketchbook and in the incomplete painting. Her lifeless body clutched a scrap of paper with writing scribed onto it, in a rough peasant’s hand. A small red kiss had been placed onto the headpiece. The girl’s mouth was daubed in a dried red substance. The headpiece was dedicated to someone called Mark Bouquet. Something clicked into place with Jamal and he nodded his head, knowingly.

“I think I know. I now remember the face of the young man in the sketchbook. It was the face of young Mark Bouquet. Mark had been found down an alley, not far from his favourite tavern, The Hobbit’s Folly. I remember that his body was so cold, when it was found that summer morning. Too cold, even for a corpse. We suspected magic had been used, but I’m just a flat-footed Watch Captain and Mark was a peasant boy – hardly warranting a magical investigation from the Wizard’s Guild, eh?”

“So, we left the case open and he was buried.”

Jamal smelt the red paint on Shannon’s lips. It smelt thickly sweet, yet sharp – laced with poison. Then, there was the note.

Your death has not gone unpunished, my love. Revenge has been visited upon he who has divided us and taken you from me. Now, there is nothing left to do, but join you, my love. As I live, we are apart; as I die, we are joined, once more.

Jamal sighed. “Shannon was a model for Armand Conway, but, judging from the amount of sketches he made of her, he must have become infatuated with her. However, there was a problem.”

“Yes. Mark Bouquet. Armand must have lured Mark down the alley, that night, then killed him using some kind of magic. Magic that chilled him to the core on a summer’s night. Somehow, Shannon must have found out – possibly by looking in the sketchbook, herself. After all, with all those morbid pictures of Mark in there, the sketchbook may as well have been a written and signed confession. So, she planned revenge. Which is where the yellow paint came in.”

“Yes. Shannon must have emptied the yellow paint pot, whilst Armand wasn’t looking. This forces Armand to go out and get more paint. Meanwhile, Shannon laces the red paint with the Blood of Nerrul – it doesn’t really matter where she got it from. Knowing Armand bit his fingernails, she waited for Armand to mix the red for the rose in the picture. Then, as he bit his nails, Armand ingested the poison, killing him. Shannon left, taking the red paint pot with her. She didn’t care if she was found – she took the red paint to write this final note and give her lover one last kiss.”

There was a pause.

“What proverb is that, sir?”

“When you seek revenge, you must first dig two graves: the first for the person against whom you wish to exact revenge and the second for yourself.”

Jamal looked down at the girl and sighed.

Case closed; both of them.