Lair of the Lich 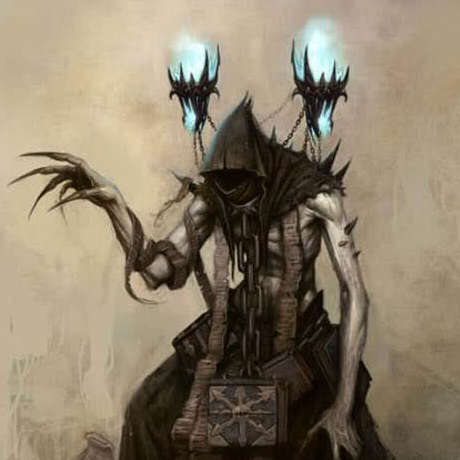 Lair of the Lich, Lhessadrak:

The location and specifics regarding the undead church have been deliberately kept vague, as this adventure location could be placed anywhere that best fits in a DM’s own campaign world. The map only shows the structure of the citadel, not even the environs surrounding it, as it could be high mountain, desert, dismal swamp or where ever it belongs in a generic homebrew campaign world.

As a site filled with intelligent undead beings there an equal chance of a hack-slash adventure as a roleplaying purest scenario.

Lhessadrak is a priestly lich and the pontiff of a dark cult dedicated to undead power in the realms. The fortress citadel serves as shrine and power center for the lich and his minions – which include vampires, a mummy, and a variety of skeletal warriors and ethereal undead.

The citadel consists of 11 octagonal towers with two high-ceiled floors, two connecting hallways on both levels, and a ground floor level only main chapel, on the north side of the complex. By the scale of the map, each tower is 20 feet in diameter, thus the entire structure is a little over 100 feet long and about 70+ feet wide. The illustration properly depicts the elevation view looking at the southern face.

There are 26 chambers or hallways in total:

1. Purification Fountain – the first chamber after the main entryway into the citadel, it is located at the “nave” of the structure. About 8 feet in diameter at the center of this octagonal chamber sits an ornate marble fountain with a child angel at the top. Instead of water, the fountain runs in blood. As worshippers in fact, anoint themselves with this blood – a mess of dried blood streaks the floor surrounding it.

(Blood Elemental as per Van Richten Guide dwells in the fountain.)

2. Chapel of Lhessadrak – features the horned skeleton, an avatar of the Undead Lord of the Abyss. Visiting worshippers, nosferatu nuns, and even Lhessadrak can be found here. This is the largest chamber in the complex. There are no permanent guardians in this chamber.

3. Hall of Pain – each connecting hallway is dedicated to one of the primary ethos of the undead cult; this one is dedicated to Pain, as the chambers beyond further serve this same ideal. On panels covering either wall, are the vilest versions of those spells that best serve, Pain, ready for copying into an undead priests daily spell prayers. At the center flagstone on the floor is a Symbol of Pain. (as per spell)

4. The Pit – 16 feet across occupying most of the floor of this chamber is a seemingly bottomless pit. As easily as it could be a 1000 feet deep, it could also serve as a teleportation access to a nether region, elsewhere in the realms or the planes, perhaps even the Abyss itself.

5. Summoning Chamber – as summoning is one of the major aspects of the undead cult, this chamber is dedicated to summoning and holding beings of power drawn to it, by the dark priesthood.

6. Bindery Chamber – adjacent to the summoning chamber, this room holds an abyssal demon-spider, through which Lhessadrak uses as a conduit to that particular level of the Abyss, which he calls his power. Although any being from that nether region can serve as conduit, the spider, lacking anything beyond animal intelligence is more easily controlled. Initially the spider was only a foot across, but after 4 centuries of nurturing with humanoid blood, the demon-spider is too large to escape the room. Ensorcelled chains help hold this monster.

7. Gaol of Infidels – a temporary prison cell holding non-worshippers who are used for lab experiments, vivisection and torture, spell components, and the causing of general despair to enhance the spell power of these undead beings.

8. Vivisectionery-Tortureum – this chamber serves as a torture chamber and a place to hold vivisection surgeries for nonbelievers, a rack dominates the northern side of this chamber. A horizontal, open iron maiden sits on the south. At center is the vivisection/autopsy table with a recent work-in-progress lying there.

9. Hall of Chaos – like the Hall of Pain, but dedicated to the ideal of chaos. Chaos spells line the wall and a Symbol of Chaos on the floor.

10. Ascension Tower – this is the primary access to the floors above and below the first floor. Steep and narrow stairs follow the walls up to the second floor 80 feet above. There is no hand-rail or walls prevent one from slipping off the stairs to the flagstones below. At the center of the chamber floor are stairs going down into the crypt-catacombs beneath the citadel and presumably where more undead guardians could be awaiting for a summons by Lhessadrak. (Unmapped region.)

11. Enchantry – is a chamber dedicated to the enchantment of unholy relics and divine devices created to serve the dark cult. It lies adjacent to the Reliquary where such items are crafted, as a first half of the process of item creation. Crafted items are placed on the central pedestal, while surrounding priests work collaborative spell of enchantments to complete them.

12. Reliquary – a chamber dedicated to the crafting of unholy relics and divine devices. A foundry lies at its center. About half the time, the craft master mummy can be found in this chamber.

13. Temple Guard Hold – this chamber serves as the temple guard station. 12 skeletal warriors serve as the primary guard soldiers to protect the structure from any with aggressive or other non-worshipping intentions at the location. Also in this chamber is a skeletal giant who serves as a guardian of the Nosferatu Nunnery, beyond this chamber.

14. Nosferatu Nunnery – four sisters of the order of undeath, vampires all use this chamber as their resting lair during daylight hours. This quartet of nuns performs most of the daily tasks in operating the shrine and serve as the most frequent “face” when requiring priestly assistance to worshippers needs.

The remaining chambers are on the second floor:

15. Necrophidium – is a workshop dedicated to the construction of golems, especially Necrophidius and Bone Golems. A nearly complete Necrophidius lies on the main workshop table.

16. Master Crafter’s Chamber – this serves as the resting place for the temple’s master crafter; a greater mummy with priestly powers and spells. The master crafter is responsible for the creation of most of the shrines unholy relics, divine items, as well as the golems. A Necrophidius lies hidden in this chamber ready to strike unwelcome guests.

17. Treasury vault – a trapped, magically locked door separates this chamber from the top of the ascension tower. Within lies the bulk of the shrines material treasures – gold, coinage, jewels and gemstones, even the lesser used arcane devices of the undead arsenal. Four shadows are bound to this chamber serving as guardians.

18. Phylactereum – serves as the vault of the Lich’s phylactery, however this is a false phylactery to trick those trying to destroy Lhessadrak. A 50-pound ruby like jewel is suspended from four ensorcelled chains from the ceiling. A column of “dark fire” envelopes the jewel as a life-draining barrier. Five wraiths seep in from the walls should this chamber be breached by anyone other than Lhessadrak.

19. Hall of Despair – the most demoralizing of spells and prayers line its walls, and a Symbol of Despair on its floor.

20. The Purification Gallery – a narrow, rail less gallery only 2 feet wide surrounds an open view of the purification fountain below. Non-believers are compelled with the suggestion to leap onto the fountain below and impale themselves onto the angel at the top.

21. Hall of Death – dedicated to spells of death, with a Symbol of Death on the floor.

22. Refectory – is a chamber with half the floor collapsed away over the Pit below. More than half the remaining floor is sloped by 15 degrees towards the center of the room. A small ledge sits at the center of the broken floor edge, serving as a place of contemplation by Lhessadrak and the other senior priests of the shrine. An invisible ghost with power to become momentarily corporeal allowing a push-attack onto non-worshippers to fall into the Pit.

23. Library – this chamber has a magically locked and trapped entrance to protect the dark tomes, scrolls and spell books kept on the shelves and table within. This chamber serves as an archival vault for the Lich’s perverse work.

24. Office of the Pontificate – this is Lhessadrak’s official office and the location he is most often found, studying in private. Six spectres are bound to this chamber serving as its guardians at all times, though remain hidden unless entered by those other than Lich and those he summons for rare visits.

25. Divinery – a chamber dedicated to the Lich’s divinations onto worshippers, those of his realm and the threats beyond. An oversized crystal ball on a pedestal lies at the center of this room, but requires the use of a divination spell cast that it enhances with great power. It does not serve those not casting spells to activate it.

26. Oracle’s Prison – this chamber serves double duty as the binding chamber for a powerful ghostly oracle, as well as the true Phylactery vault. Vanarra was a powerful natural oracle in life who succumbed to the dark gifts and promises of Lhessadrak in exchange for her gift of sight to better protector false benefactor. In an act of a dark curse, Vanarra died still under the power of the Lich. She became a very powerful ghost, even deadly to the Lich himself. The only way to continue to receive her visions, she was permanently bound into this chamber with a powerful binding hex on the floor. Because she is so dangerous, she is the most powerful guardian of Lhessadrak’s true phylactery, which lie hidden beneath the floor at the center of the room forever protected by Vanarra’s spirit.

The citadel has a number of other enchanted protections and enhancements. The walls of the structure is covered in fungi and lichens, thus preventing teleportation through them in or out. A powerful teleport redirection spell is enplace forcing those within the structure trying to escape to arrive just over the Pit, instead. The turning of Undead of priests and paladins work as if they are four levels lower. All summoning spells outside the summoning chamber can only summon beings within the complex, which other than the adventuring party consist only of the undead – mostly from the crypt-catacombs beneath.

Presumably the Lich maintains an extended organization in the region surrounding the citadel along with a dire agenda – all this belongs in the hands of the DM as he or she best sees fit within their campaign setting.