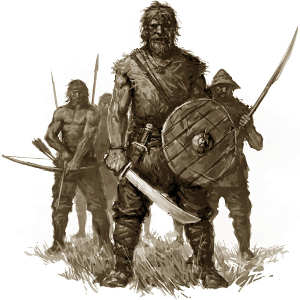 While Lucia and the rest of the party slept at Correl’s, Crinn headed out into the streets of Preen to see his contact once again. She was pleased to find that the women Hebert had been holding against their will had been freed, and she offered to help the party in any way she could. Crinn mentioned the plan to stop Hebert’s caravan, as well as their need for more men to mount the assault. The contact mentioned that Kurt Sidney might be willing to help and that Sidney and his men had been soldiers in the army of Lundy before they came to Preen. However, Sidney and his men were deserters, and the contact did not know how Antonio Gennari would feel about hiring them. Sidney might be more comfortable working with a peer of Lundy if he could get assurances that his status as a deserter would not be a problem. Crinn was pleased to hear this and, before taking his leave, he said that he would talk to both men about the situation.

The next morning Antonio Gennari sent a messenger early to warn the party that he would be calling on them for lunch at Correl’s. This was welcome news, since a conference with Gennari was necessary for working out the detailed plan of attack on Hebert’s caravan. Gennari arrived, and Crinn mentioned Sidney’s situation without revealing any names. Gennari seemed to care little about Sidney’s deserter status, acknowledging with Lucia that war often creates difficult situations for soldiers. It was clear, however, that Gennari’s desperate desire to succeed was playing a large role in facilitating such a relaxed attitude. At Lucia’s and Crinn’s urging, Antonio also consented to provide five armored men of his own, as well as equipment for up to five others.

Before lunch was over, Antonio gingerly broached one final issue with the group. In order to fully capitalize on Hebert’s weakened position after the raid on the caravan, Gennari would need to put a number of local merchants, guilds, constables, and officials on the Gennari payroll. The initial investment to bring these various groups over to his side would be considerable – likely no less than ten thousand gold. Gennari himself had been saving toward these known costs for some time, but he only had half the money necessary and he felt that if Lucia or her father could provide matching funds, it would assure the Gennaris control in Preen. Knowing just how costly her trip thus far had been to the treasury of Lundy, Lucia hesitated but ultimately agreed to Gennari’s demand, signing her name to a letter of credit and handing it over to the young lord.

That afternoon, Crinn made arrangements with Sidney. Once he heard of Antonio Gennari’s positive disposition toward his situation and of the possibility of permanent employment by the peer, he was more than happy to hire himself on. Obviously there was no love lost between Sidney and the Heberts. The former soldier even agreed to supply himself and his five men with horses and weaponry.

With their numbers now sufficient to tackle Hebert’s caravan, all that was left was to formulate a plan of attack. Anubis scouted out a ford south of town that would make for a perfect ambush location. The party decided that they would place archers on the far bank of the river with Sidney’s men posted behind some rocks. Lucia would lead five men across the river, casting entangle on the unsuspecting caravan just as their cart reached the south side of the river. Daniella would maintain a position on the other side of the river, lobbing magic missiles and sleep spells at the head of the caravan. The ambush would take place just before noon the next day. Anubis would leave early in the morning by horseback in order to scout the caravan and report back with specific numbers and information on the formation of the guards. In the meantime, the rest of the party would gather the soldiers at Caraviu and travel southward together to the ambush point. If all went well, the party would have most of the guards incapacitated before they could even think to act.