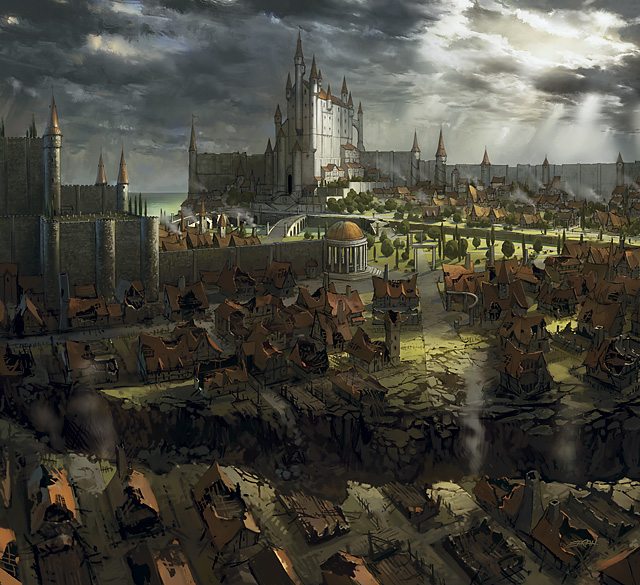 See Land’s Edge for more details about the history of the area..

The keep lies just outside of land’s edge, a straight path now somewhat overgrown leads to the front gates. There is an ominous presence about the place and the feeling of being watched by unseen watchers.

After Castilus was imprisoned he used his summoning powers to destroy everyone in the castle.

1. The Front Gates: The front gates are shut and on closer examination appear to have been wedged shut… from the outside. It seems that someone outside the castle wedged a large block of wood in the gates as if to keep someone inside from opening it. It will be a simple matter for the party to open the gates, the wood has rotted and can be easily shoved out, from this side.

2. The Entranceway: This large room was the sight of a large battle. The huge carpet in the center has mildewed from soaked blood split on it. Several dismembered corpses litter the room in various spots. Though the remains are scattered through the room making identification hard, enough is left to believe that these were corpses of soldiers.

3. Guard Room 1: This room contains the skeletal remains of 3 soldiers along with an overturned table and some wrecked chairs. It appears the soldiers were attacked while having a meal. Searching through the corpses and debris turns up a few coins, 8 gp.,15 sp., and 22 cp.

4. Guard room 2: This second guard room is empty of corpses but the furniture has been ripped up somewhat, these were the guards that died in room 2. A table, 4 chairs, and a weapons rack are in this room. A more thorough search discovers nothing of value.

5. Kitchen: This area is typical of a large kitchen being designed to feed both the soldiers and the masters of the castle. There is a large and disquieting blood stain on the preparation table but no corpse is evident. A large bur rusted cleaver, still flecked with blood, is stuck in the table top. Nothing of value is here save for a few rusted knives.

6. Meat Locker: A horrific smell of decay wafts out upon the opening of this sealed door. Inside the body of the head cook lies in pieces on the meat hooks where he was hung when the castle was taken. The rotting process was slowed by the sealed room but he is still nothing more than bones with some putrid meat that has dropped of below the hooks. Have the players make CON checks to avoid nausea or vomiting from over powering rotting smell.

7. Pantry: This was a storage area for the dried food stuffs. The door hangs loosely against the hinges, it was busted in. The first thing the party will notice are 2 more sets of remains (The other 2 cooks attempted to hide in here but were discovered). They lie partially behind barrels and crates of old spoiled food. None of the food in here has remained untainted due to the presence of fiends.

8. Privies: The indoor toilets for the castle. Nothing more than holes really and if the PCs check one corpse was stuffed inside a hole and lies at the bottom. If the PCs decide to investigate the toilet they deserve something, a small necklace made of gold and brass (42 gp) on the corpse and not clean.

9. Main Dining Room: A goodly portion of the fighting happened here. Several corpses, soldiers and a few servants, lie here. On the main table lies a skeleton with the remains of an apple wedged down it throat, the victim of some demonic prank.

10A and 10B. Barracks: These rooms are a slaughterhouse. Since the attack happened in the late night many of the soldiers died in their beds. The rest were quickly overwhelmed and killed. These rooms were the main quarters for up to 40 soldiers, it contains the remains of cots and footlockers along with a few chairs.

11. Officer’s Quarters: This was the captain’s quarters, it is relatively intact since he died in the main hall and not here. It contains a bed, locker, and a few personal goods. The soldiers payroll is in a locked strongbox under the bed. Treasure: in the locked box is 200 gp.

12. Guest Room: A friend from the royal court was visiting Serek at the time of the incident. He was killed here in his bedroom. The room itself is basically intact. The bed is somewhat shredded since the courtier tried to hide behind it. His corpse is still visible lying half underneath the bed. On the night table are the remains of a delicate china pitcher (ruined) along with a pitted copper goblet (value 30 gp.). There is also a large armoire, inside are the tatters of the rich clothes brought by the visitor along with his wealth, rotted belt pouch contains 42 pp., 68 gp., 4x 50 GP. trade gems.

13A, B, C. Cereal’s Quarters: These sumptuous quarters belonged to the wizard Serek. Since he had no wife or children he had the nursery and sitting room walls knocked down to expand his own rooms.

13A.: The former nursery is now a private dining area. The large table here is made of a valuable mahogany wood but alas has become too defaced to be of any real value any longer. Four tall high backed chairs also sprawl about the area. Treasure: Silver serving tray (value 65 gp.)

13B.: The former sitting room has been changed to an expensive laboratory. There are signs of a small explosion having taken place here. The entire lab is a total loss except for a pair of potion vials that can be found if the area is searched for 1 turn. Treasure: 2 clearly marked vials containing potions of 1 extra-healing, 2 invisibility (4 doses)

13C. Serek’s bedroom: This area contains the remains of a four poster bed and an armoire that both may have had some value before they were destroyed. In the armoire all the clothing has been ripped to shreds. The bed is likewise damaged, even the sheets!

If players search the armoire thoroughly they may find a secret compartment containing Serek’s dairy and the keys to the vault, area 17. The diary details for players what Serek’s intentions were and the reasons for his actions. With a thorough reading, and a spellcraft roll, the players will realize the mistake that Serek made. He improperly sealed his containment circle, the ways that the demon may be sealed in the summoning room, or sent back. It also contains information on the “Island of Vigilance”.

14. Library: This room has obviously been enlarged over the years. The remains of a bricked over doorway still show in the hallway. Bookcases line this room along with two large portraits of Serek himself. Most of the books have been thrown to the floor and some have been shredded. Other have been claimed by mold and ill use.
Treasure: with a detect magic spell players can find an old spell book from Serek’s apprentice days. This contains the spells: detect magic, magic missile, light, stinking cloud, and web, along with any others the DM would prefer the party to have.

15. Parlor: The once posh sitting room has suffered quite a bit. Fluffy pillows, wood divans, and plush couches litter the room, all having been damaged or broken in some fashion. Paintings, perhaps masterpieces once, line the walls. All destroyed, the signs of claw marks dripping red blood. The only ominous clue toward who or what did the damage.
Treasure: moving the furniture in here will allow the players to discover a small pouch containing 45 gp.

16. Storage Rooms: These rooms are designed for storage of furniture, clothing, some belongings of previous governors, etc. There is nothing of real value here.

17. Vault: This door is made of wood and bound with iron. The most remarkable thing is that it is still intact. This is due to the wizard lock that Serek placed upon it and the spell traps he placed on the locks. There are 2 locks and if a picking attempt is made or the wrong key inserted into the locks a magic missile spell strikes the offender (3 missiles at 1d4+1 each). This trap can be reused even if discharged.
Treasure: If the players manage to get into the vaults they discover 2 chests.
Chest 1, the payroll: Inside is 6 bags each containing 100 gp.
Chest 2, Serek’s personal wealth and taxes: Inside this chest is 200 gp., 88 sp., and 67 cp. Serek had secretly spent most of his fortune on materials for his revenge. Also inside is a flame tongue long sword. Since Serek could not make use of such an item he was hoping to sell it to gain some much needed cash.

18. The last stand: In this Hallway are several more remains, 4 bodies in all. There is also something scratched into the surface of the closed door. On closer examination it appears someone was trying to scratch a symbol of some type into the door. With a religion roll, at +2 bonus due to ease or DC 10, someone in the party recognizes the symbol as belonging to the sea god that whose temple in Land’s Edge was ruined. A spellcraft roll will give the idea that a priest, one of the corpses, was attempting to cast a protection from evil spell on the door, perhaps to seal it somehow.

If a protection from evil or protection from evil 10′ radius spell is cast with the door being the target, Castilus spells will no longer reach out of the room and he is effectively sealed inside. He will call out to the players but his muffled lies are not likely to be taken seriously. If someone attempts to seal up the door Castilus will send a telepathic summons to all the creatures currently summoned or under his influence. They will head to the castle in different groups to attempt to reopen the door.

19. The Summoning Room: This 20′ x 20′ room seems naturally dark. The room itself is mostly empty, along the floor lies most things of interest. First is the summoning circle made of inlaid silver (40 gp. value if they can pry it all up), second is the triangle that surrounds the circle (spellcraft rolls or having Serek’s notes will allow the party to discover that this symbol both boosts the creatures abilities but also ties it to this room.

The next thing they will notice is the dried and destroyed corpse of Serek lying against a wall where Castilus hurled the dead wizard after the botched summoning went awry. Last but not least Castilus himself will be here in the middle circle using illusions to appear as some kind of deva or other goodly extra planar creature. He will attempt to convince the characters to free him so he can lift the curse that lies on the town.

To free him the inlaid triangle must be destroyed, which is a simple matter. If freed he will attempt to eliminate the party per the write up in adventure text 4E. If defeated Castilus has no real treasure no matter what lies or illusions he has shown the party. If they think to search the corpse of Serek they will discover a few items that the disgraced wizard still had access to.
Treasure: bracers AC 6 (on wrists) ,+1 dagger in belt, a golden necklace with royal symbol in silver (a gift from a friend 250 gp.). Serek’s spell book had been ripped to shreds by the demon but with work they may be able enough to learn 2 or 3 spells (DM’s discretion as to what)