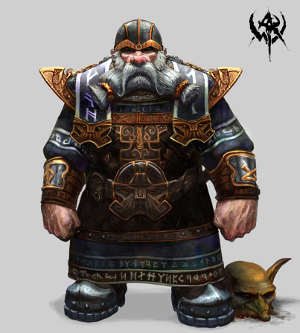 Regner is the de facto leader of a small group of dwarven refugees. He is desperate to help his people survive and will do anything he must to achieve this goal. Goblins have taken what little food and clothing his group managed to escape with from their former home.

In other situations Regner is friendly enough but exhaustion. Starvation and exposure have driven him and his people to the edge of despair. Regner considers it imperative that he inspire his people to want to escape. He feels (rightly) that many of them have suffered to much and are ready to lay down and die.

Note: Regner’s tribe was attacked by a group of duergar aided by a beholder. The rest of the tribe was captured and forced into slavery. The duergar now operate a mine complex beneath the dwarves underground home. Regner has no idea what they might actually be mining for….