Defenders of the Faith Errata 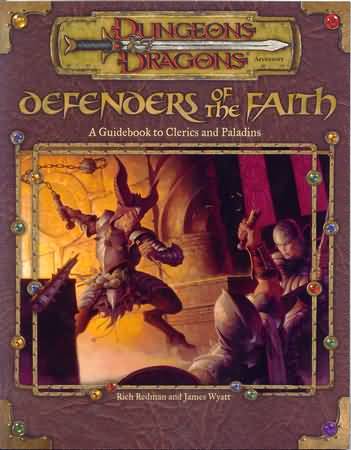 Can Exorcists Turn Evil Outsiders? The example on p. 77 [in which it is stated that the Exorcism domain’s granted power allows the turning of evil outsiders, which contradicts the description of the Exorcism domain’s powers on p. 79] is incorrect (it refers to a previous incarnation of the rules), and I’d be cautious about allowing exorcists to turn evil outsiders too easily. If you use it, I suggest using the mechanic from the Knight of the Chalice’s censure demons ability. (James Wyatt)

Warpriest Prestige class: …the 4th level [Prestige Domain] ability should grant access to the Divination prestige domain. [Read the rest of the thread at WotC’s Boards]

Sacred Fist prestige class — Ranged spells okay?: Sacred fists can use whatever spells they have freely, whatever their range entries. Sacred fists cannot use weapons; spells are not “weapons” for purposes of the sacred fist’s code of conduct. Passing references to a ban on ranged spells are unwanted artifacts from an earlier version of this class. [Sage Advice, Dragon #286]

Sacred Fist prestige class — Spells: The level 0 and level 5 spell lists are errors. [They only get spells levels 1-4 as shown on the class table.] [Sage Advice, Dragon #286]

Hospitaler prestige class — Spells: The first entry (Spells) is incorrect. Use the second entry (Spells per Day) instead. In addition, Table 3-7 should have a Spells per Day column, which should read “+1 level of existing class” at each level. [Sage Advice, Dragon #286]

Ghosts and Vampires sidebar (Master of Shrouds prestige class): The sidebar in question shouldn’t be there at all (it was supposed to be cut from the book). [Sage Advice, Dragon #286]