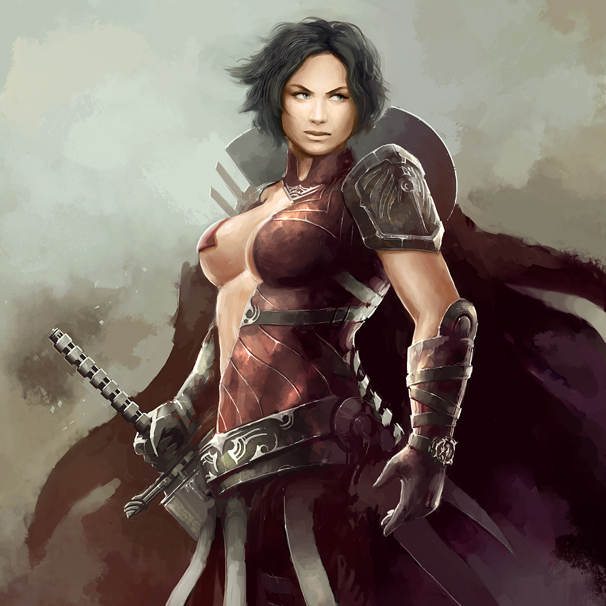 The woman known as Shar was a foundling discovered by an infamous mercenary company. She was raised by members of the band and grew to become one of their better warriors and small unit commanders. She eventually felt the urge to strike out on her own and make her own fortune. She founded her own small band of mercenaries, whose ranks are ever changing, called “Shar’s Marauders”. This group includes Grug, Malchor, Marne, Phantasm, and Reavis.

Shar has since become a very capable mercenary leader who commands top gold for her services. She swears allegiance to no lord for too long, and allows no attachments to interfere with her ambitions. She would one day like to command an army under a worthy rich king. Then perhaps, she thinks to become a ruler in her own right.

Shar’s personality is always the professional soldier. She expects discipline and unwavering obedience from those under her command. Disobedience is met with firm punishment. This goes to explain her high turnover rate. She keeps the band small, for now, to better control her people and the type of work she takes. While she would not be adverse to commanding larger groups of men for an employer, she does not want to get stuck in a permanent role with no upward mobility. “To stagnate is to die…”

Shar rarely takes lovers, and this is her most obvious weakness. Her disciplined outlook attracts her either to rakish rogues who live life carelessly or to other warriors who outplay her somehow. A lover could get close enough to sabotage her missions or infiltrate her ranks. She is however, far from a gullible trusting soul. So any lover would be watched closely and possibly sent on a few loyalty tasks before he would be allowed to join the marauders.

One more item of note, Shar is not evil but very self and unit oriented. She will get rid of evil band members who cause her undue problems, she might also be convinced to turn on an employer who was committing grave atrocities.