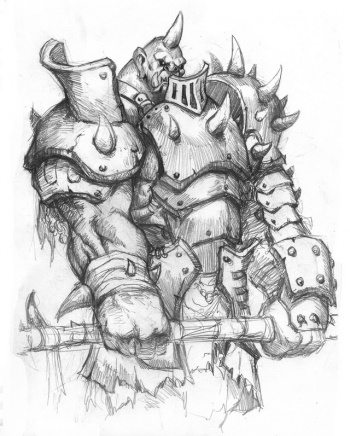 Grug is a member of “Shar’s Marauders”, a small mercenary band led by the infamous Shar The Cold. Grug is a devoted slave to Shar who spared his life after defeating him in combat. Shar kept Grug from being slain by other hirelings of the lord she was serving at the time. Grug is very direct. He smashes anything Shar tells him to, and guards her from harm. He has slight fear of magic and is afraid of Phantasm in particular.

Grug has a natural Armor Class of 5 (15 3E), later in the campaign Shar manages to have some piece meal armor made for him, A large chain mail shirt and a pair of metal grieves (lower leg armor). This only manages to give him 1 more point of armor class, though it does make him look more fearsome. Also later Shar arms him with a large two-handed sword instead of the giant war club he normally uses.