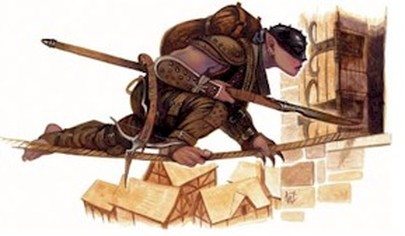 Here are a few new feats. The first is a special one, usable only by the DM’s permission. Dreamspeaking should only be used in campaigns where magical dreams of some importance are fairly common. Prophetic dreams are a frequently used plot device; this feat simply makes for a way to handle the plot device within the bounds of the rules. The rest are all inspired by existing D&D feats — a number of them are based on the same idea as Alertness.

Dreamspeaking [General]
Sometimes dreams are important missives sent from above, or from within. You can interpret the dreams that you have, or that others have.
Prerequisite: Wis 15+
Benefit: When someone tells you about a dream, or when you consider your own dream, you can tell automatically if it was a dream of importance, also known as a “sending” dream. If it is a sending dream, you can attempt a Wisdom check (DC 15) to interpret its meaning. If your Wisdom check succeeds, the DM should give you some clue as to the meaning of the dream. (For example, a character might dream of a threatening rider dressed in black, surrounded by ravens. On a successful Wisdom check, the player learns that the dream foretells an encounter with a foe named “raven.” Later the party does indeed go up against a villain named Kevris Killraven.) Retries are not allowed.

Ranged Expertise [General]
You are trained at using your ranged combat skill for defense as well as offense.
Prerequisite: Int 13+
Benefit: When using an attack action or full attack action with a ranged weapon, the character can take a penalty of as much as -5 on the = attack and add the same number (up to +5) to his or her Armor Class against either ranged or melee attacks. This number may not exceed the character’s base attack bonus. The changes to attack rolls and Armor Class last until the character’s next action. The bonus to the character’s Armor Class is a dodge bonus.

Forced Swiftness [General]
You can run when encumbrance and armor otherwise would not allow it.
Prerequisite: Str 13+
Benefit: You can run when the armor you are wearing or the amount of gear you are carrying normally would prevent you from running.

Nimble Fingers [General]*
You have dexterous fingers and good hand-to-eye coordination.
Benefit: You gain a +2 bonus to Disable Device and Pick Locks checks.

Athleticism [General]*
You use your physique and agility to their utmost.
Benefit: You gain a +2 bonus to Climb and Jump checks.

Agile Limbs [General]*
You are limber and dexterous, allowing you to move gracefully.
Benefit: You gain a +2 to Balance and Move Silently.

Outdoorsman [General]*
You are trained particularly well for life in the wild.
Benefit: You gain a +2 bonus to Handle Animal and Wilderness Lore

Magical Talent [General]*
The mystical and eldritch secrets are clear to you.
Benefit: You gain a +2 bonus to Knowledge (arcana) and Spellcraft

*These last five feats work best when you adopt the house rule that the feat Skill Focus adds +3 to a skill rather than the listed +2.