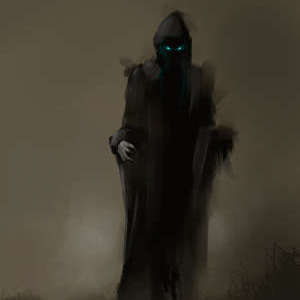 Note: Phantasm is obviously using the Marauders to collect all the masks, though it is not their employer, and it will abandon them whenever it seems convenient. Also this is a good foe to use nonstandard spells with as phantasm has no need for a spell book.

Phantasm is a mysterious illusionist who serves in the mercenary band “Shar’s Marauders” under the command of Shar The Cold.

Phantasm’s history in unknown to all. He/she wears veils and is under the influence of constant illusion spells.

Phantasm dresses in hooded robes of a deep purplish color. Occasionally a tentacle will emerge from the hood, leading most to believe that Phantasm is not remotely human or demi-human.

He/she refuses to answer question on its background or true race. Likewise its motives are unknown other than its alliance with Shar as a mercenary hireling.

In reality Phantasm is really a minor avatar of Seil a weak god of illusions, trickery, and lies. This being is unable to expend much of its energies without attracting the attention of other beings of power. It has created this being to help in its search for the masks.

This godling desires to acquire the masks to increase its own powers of magic by absorbing the essence of the Arch-magi Xoth that is broken up amongst the masks. If its avatar, Phantasm, is destroyed it will not risk creating another but will seek revenge on the offenders at some other time.

Special Abilities: Phantasm is under a constant change self and alter self spell. If asleep or unconscious its form will shift randomly though slowly. Also intelligent beings feel uncomfortable around this outer-world creature, hence the low CHA. Animals refuse to be close and horses refuse to carry it, use phantasmal steed spells or mount. NO ILLUSION spells work on this being.