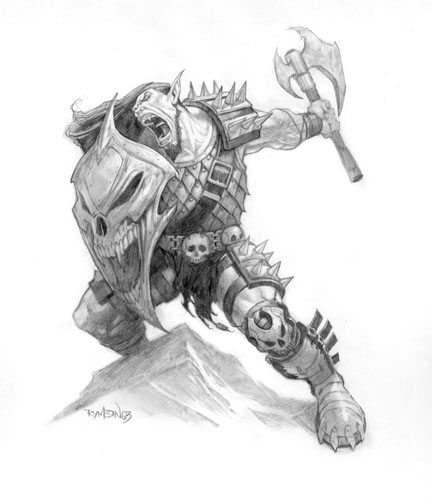 Negahri started life already on the wrong foot. His father, Negahro, was an big ugly ogre and his mother was human. His father captured his mother in a raid against a small human settlement and fell in love with her. Unfortunately she did not love him back. So Negahro kept her locked away from others in his tribe and from escaping.

His tribe did not share the love for this human woman as Negahro did. She was abused several times and Negahro had to kill the offenders. Eventually she became pregnant, but with who’s child no one knows. After some time it was discovered that this woman was someone’s else’s wife, someone looking for Negahro.

On the day she gave birth the ogre village was discovered by her human husband. He had gathered a group to hunt down the one who had stolen his wife, for several months he had searched. The ogre tribe was slaughtered by the humans and the Negahri’s mother rescued.

Although the baby she birthed was half human and half ogre she stilled loved the child for it was her own. Her husband, a ranger of some fame, was outraged at the though of this abomination coming in to his life. She begged for baby Negahri’s life explaining that his destiny was not yet determined, he had committed no evil to the world. Her husband decided not to kill Negahri for she was right, each had a right to live. Instead he took his wife and let the gods decide what would happen to this baby, so it was left behind.

A couple days later a group of traveling halflings came across the decimated village of ogres. They found Negahri crying like a baby moose in pain. He was hungry, and you know how hungry ogres get. Instinctively they wanted to kill him. As all halflings know ogres, even 1/2 ogres, eat halflings for breakfast. The elder of the group saw the situation and the debate about the baby. “All life deserves a chance to do good in the world, no matter what birth one is from” the elder exclaimed. That was all that was needed and the halflings took Negahri with them.

Many years later Negahri had grown up a strong half ogre, but a bit short. He was the halflings’ defender, their champion. He had grown up not evil, but also not so good. Although he was not the generous person the halflings had hoped he would be, his love for them compensated. Negahri would never harm any of them, they saved his life.

One day Negahri decided that he must know who was his mother. With that thought he gathered his things, said good bye, and left in one day. As ogres are direct and single minded this was not unusual for Negahri. His family did not understand, but they loved him and bid him a good journey.

Ever since Negahri has roamed the lands taking odd jobs here and there always looking, always searching for who his mother really was. In his heart he knew that she was the one who gave him the chance to live, so he must thank her and let her know her love was not forgotten. As for his father… “he should have ducked when human bashed him” he would always say.

Personality: Negahri is a person who doesn’t bother anyone or gets involved in anything that’s not his business. He works hard, and does his job well. He has a soft spot for halflings and will always try to befriend them. He wants to find his mother and will assist others if it helps him get closer to his goal, be it information or more money for travel. He will serve good or evil.

Negahri is a bit short tempered and may go wild in a fight if he is out classed in combat, or decimating everything in sight, 20% chance. He does not like being tricked, betrayed, or made a fool of. Negahri is extreme, he is one’s best friend, and someone’s worst enemy. He will always risk his life for his family or someone who is close. It takes a long time and several sacrifices to really befriend Negahri, like saving his live 5 times, before he trusts someone.