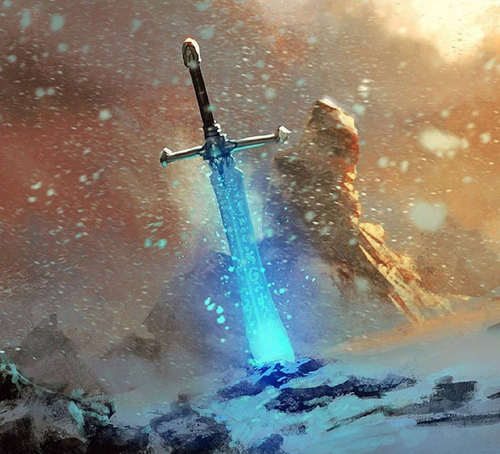 The sword was requisitioned by a paladin, Sir Lukos Castillo, for his quest to slay a red dragon named Thraxix assaulting the nearby lands. She was an ancient wyrm of colossal size and power. The sword was made as a frostbrand to protect the Sir Lukos from the awful fiery breath of the red beast. A special sword for a single purpose.

A silver dragon named Faergrunithax had been watching the torment that his adversary was causing in the land but was too young to stop her. After learning of the paladin’s quest he befriended the human and offered assistance. he felt that together they might vanquish the menace.

Together, this force of good went into the lair of the ancient Thraxix and battled the beast. After a brief battle, the knight and his dragon steed retreated. Faergrun was mortally wounded and could carry on no longer. The red dragon was too fierce, too powerful, but yet they did manage to injure her enough where she did not pursue. When they retreated to a place of safety the young dragon knew he was dying. Sir Lukos was not ready to give up and insisted he go back alone. Faergrunithax knew this was futile and typical of humans but could not talk the knight out of his will to destroy the red beast. The young dragon decided since he was on his last breath he was going to use the last of his magic and aura to enchant the sword’s power even further in hopes of aiding the paladin’s noble but suicidal cause.

After the knight had healed up, he returned with only his skill, courage, and his sword to the lair of Thraxix. No one has seen or heard of him since, but yet, no one has heard from the dragon either. Of the sword, Faergrun the Wyrmslayer, legends say that the dragon yet lives and the sword is in her horde, mocking and taunting her constantly. Others say that it was thrust in to her belly crippling her and forcing her to hide elsewhere to recover from such wounds.

Abilities: The sword is a standard frost brand with the following added abilities.