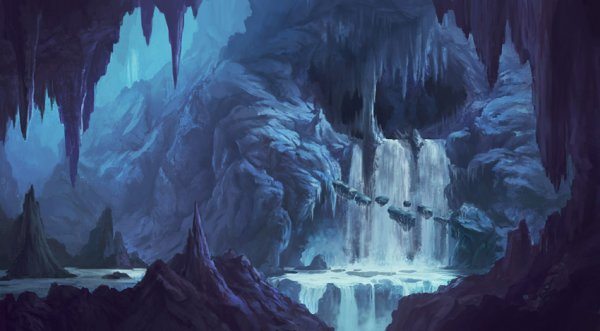 Once across the rope bridge the PCs will have to locate the cave. They are currently standing at the base of a mountain with small caves and nooks all along its sides.

The search will take several more days and the PCs will notice clouds moving in. Players with weather sense skills will realize a snow storm is coming, perhaps a blizzard even.

Sure enough that night the winds begin to howl and a blizzard sets in by morning. Visibility quickly becomes only a few feet and shelter must be found or the PCs will die! The smallish caves that dot the mountain are not deep enough to give cover. Party members without any protection spells from cold will now take 1 hit point of damage every 4 hours.

Eventually Elan will cast a locate object spell to look for cover. She will point through the blinding snow and yell out “That way!”. If the party members run blindly after her they will also fall into the snowy crevasse that she falls into, taking 1d6 damage.

The crevasse is a ragged hole in the earth mostly covered by snow, it drops about 10′. Elan has twisted her ankle badly upon falling in, a cure light wounds spell to fix.

A short look around the hole reveals this to be the cover that Elan located with her spell. The players can cover up the top with blankets or tents to keep out the wind and set a fire. The players will obviously set up camp to eat, heal wounds, and light a fire to keep warm.

Unfortunately this crevasse is unstable, the floor is mostly ice and a fire melts it enough causing it to collapse. Later when most of the party is sleeping a cracking noise will be heard, followed quickly by more, then the floor shifting, then collapsing! The party will be dropped onto a mound of broken rock and ice. They will keep rolling and falling into an underground river, 1d6 of damage for the fall. If the party does not light a fire make the ice collapse under their weight.

The river is unfrozen and not very deep but still too cold for the PCs. The river is fast however those with swimming skill will be able to control themselves immediately. Those without swimming must make a strength check or be helped out. A shore is nearby with a natural alcove, about 10′ in diameter. The party however is now in dire trouble. Some belongings will be lost in the river and all the tinder will be wet. The party is soaking wet now and those without magical protections from cold will soon die! Nahh, just let em think this.

Hypothermia and frostbite will be coming on and the weaker members wont have long to live. Huddling together, body to body contact, for warmth is all they can do really. This will only allow them to live a bit longer of course. After a bit Elan who is chattering constantly will slip into delirium and call to her parents, eventually getting a bit loud before passing out.

As they attempt to dry off they realize that going back up the rock/ice slide will be nearly impossible. There is a slightly warm breeze coming from somewhere. With a little bit of effort, and infravision to see the waves of heat in the air, they will realize that the breeze is coming from a hole the underground river goes into.

So its back into the water they go!. The river seems to head back underground a few feet away but if checked leads into a more or less naturally eroded cavern. They will have to swim underwater for about 30′ and in water for another 40′.