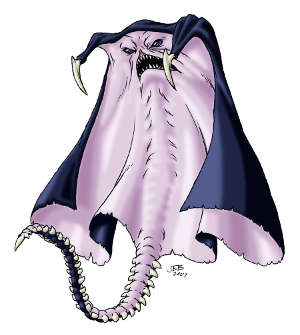 The origin of the Nightmare Cloak goes back some 150 years. A prosperous young rogue named Jarus happened to encounter one of the vile creatures, known as a cloaker, while exploring a dungeon for treasures. He was caught by surprise by the creature almost succumbed to its powers. He barely escaped with his life. Seeing the potential for this creature and knowing a bit of magic he hired a mage to see if he could capture the cloaker.
After a bit of a hunt, some gold spent on mercenaries, and with the help of the mage, Jarus captured the cloaker that attacked him and began to turn it into a tool of personal power. The mage transformed the cloaker into the what Jarus labeled as a Nightmare Cloak. The rogue paid a hefty price for this item, but to him it was worth it to have such an ally in case of trouble.

Well the cloak made Jarus a braver soul but not less foolish. While on another treasure finding excursion within a perilous tomb he encountered some undead that guarded the area. Jarus died being torn limb from limb as the cloaker’s mind numbing effects were powerless against the mindless zombies that overwhelmed him. The cloak and Jarus’s zombified corpse was only later to be found by a band of explorers that cleared out the undead eventually. From then on the Nightmare Cloak’s history is shrouded in mystery as it passed from owner to owner.

This cloak has a silky black back, and a white inside. It has two hooks that snap together below the neck. There are two buttons on the outside, bellow the neck. At the end, and long tail of cloth drags.

Abilities: When the cloak is flung into the air with the proper command word given it transforms into a cloaker MM 37 3E for a period of 6 rounds. During this time the cloaker is under command of the cloak’s owner. It will attack and use all of its ability to destroy its owner’s enemies. When it is a cloak the cloaker gains 5 hit points a day if damaged. If the cloaker is killed the cloak loses all magical ability and turns into a tattered and torn cloth cloak.

Any time the power of the Nightmare Cloak is evoked there is a chance the cloaker breaks free of the enchantment binding it to the cloak. A 1% chance exists at all times when the cloaker is activated. For every 5 hit points of damage the cloaker takes the chance goes up by 1%.

If the cloaker breaks free it will turn on its owner immediately and intelligently, assisting other creatures its owner is in combat with. If it sees no way of exacting its revenge on its master it will flee.