Masks of Destiny Campaign – Chapter 5c: Temple of the Sahuagin 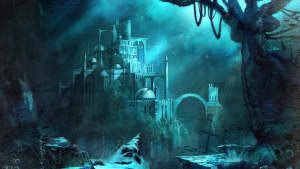 Once the players have dealt with the outside patrol or have snuck by them they can examine the building itself. It appears to be made of stone and intermixed with coral. It is 20′ high and about 100′ wide. Their are no other buildings nearby nor is their a back way out of the building, visibly.

There is a secret way out in the top of temple from the top. A loose block can be removed so a swimmer can flee and call the nearest garrison for help in case of a siege. If the players take this way in it leads into the main temple area and is fairly obvious to anyone in that room.

The main doors of the temple are stone inlaid with coral to from swirling nautilus (conch shell) like designs. The doors are 15′ tall. See The Undersea Temple for details on the building and its occupants.

It will take 2 rounds for a guard from the outside patrol to alert the guards at the entrance. From there a guard is sent to alert first the captain of the guards then, if the captain agrees, the guard alerts the high priestess, lesser priestesses, then goes to the barracks. Last to be alerted will be the shark handlers since they are not considered warriors.

The first to respond will be the warriors from the first barracks followed by the second barracks. It will take 3 rounds before the barracks guards are warned, then 2 rounds later the guards from the 1st barracks will arrive into the main temple, or hallway as the case may be, followed 1 round later by the second group of guards. After that the 2 lesser clerics will arrive 1 round after the 2nd group of guards. The high priestess and captain will respond together 1 more round after the lesser clerics. They both hold off to observe the situation, then the clerics will begin spell casting while the captain either wades in or sends for the sharks.

The sahuagin guards are nearly fanatical and will not flee or surrender so long as the captain or any priests remain alive. The high priestess will try to negotiate, she speaks common, if more than 50% of her group is killed and the attackers seem powerful enough to destroy her. She will have no information about the mask or what it is if the PCs ask about it and neither will the others. The mask was received from Vargas by a previous High priestess.

It will be almost impossible to convince the sahaugin to let the players search the outpost. If the players can somehow think of it, they will mention keeping some items in storage, if the players let on that the mask has magical powers the high priestess will not surrender it unless personally threatened and all other allies are dead.