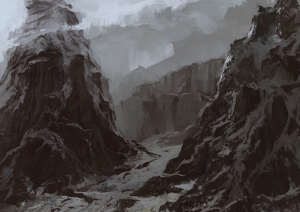 The characters have finally put the Sundered Bone goblin tribe behind them. Hopefully Regner and some members of his clan have survived also. They have also finally reached the area that Charilus has sent them to. Their map notes that they are at a set of mountains known as The Wrestlers and that they need to look for an underground tomb, temple, or some other type of complex to locate the next Mask.

Unfortunately The Wrestlers are a series of mountain peaks that culminates into 1 peak. The peak appears to be to 2 men wrestling each other. The party quickly realizes that the area to search is huge and could take months to comb it without some kind of magical assistance.

Regner will be happy to volunteer himself and his people to aid the players if they can continue to look for a new home for his people also. “Perhaps”, he says “we may find a home in this mountain range that you need to search”.

The players will probably try using magic to solve their problems here. They are extremely unlikely to find anything that way. Magical divinations will not reveal anything close by and divine inspiration will turn up little more than “Help is given to those who help themselves”.

Allow the players some time to then figure out methods for scouting the mountains, dividing up into search groups, finding a home base to rest at, and necessities like food and water.

Note: If they do not seem inclined to do this for themselves you can have Regner suggest it to them. He is skilled at survival in this terrain and can make suggestions though his first concern would to be finding a safe place to base out of and food for his people.