Masks of Destiny Campaign – Chapter 10b: Between a Rock and a Hard place 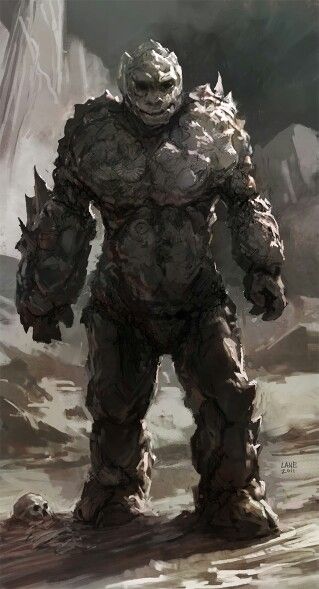 The players have begun combing the Mountain range known as The Wrestlers for several days. They have had to find shelter, food, and water before beginning their search for the underground tomb.

The dwarves are some help to the party; they are able to give some tips for searching, climbing, and general safety tips. One thing of note is that this mountain range is fairly desolate, almost no intelligent beings reside on or in it. A few wandering encounters could occur but they will tend to be non-intelligent animals/monsters who are motivated mostly by hunger or territorial instincts. After a few days of searching, and possibly looking for a better shelter, a search party will be attacked.

The search party that is attacked should consist of players or be player led, while they are scouring the mountainside a large boulder impacts near the party, or if you like hits the PC with the most HPs for appropriate damage.

Normal sight will not immediately reveal who threw it at them but detecting for invisible or waiting for the next one will. The boulders came from the Stone Giant Priest Crusht. He is currently camouflaged against the rocks but will be revealed when he throws the next boulder and yells out a warning, in Giantish, for the party to “leave this place or be destroyed!”

After throwing a 2nd boulder Crusht will threaten to throw more if the party shows signs of attacking or advancing on him. The only options here are:

1. Retreat: If they do this Crusht will watch to make sure they do not return but will not attack them further.

2. Attack: Crusht will defend himself with all the spells at his disposal. He does not wish to die however and if it appears he is going to lose he will cast Meld into stone and retreat. He will later heal his wounds and summon an earth elemental. The elemental serves without being forced and stays till it completes it task. He will Spell up the elemental to protect it and have it attack the parties camp at night when they rest, if possible he will assist it with hurled boulders that are inscribed with Glyph of warding spells or other tricks.

3. Diplomacy: If the players can communicate with Crusht (he speaks giantish and dwarven) he can be reasoned with. He will inform the party that they stand on sacred ground and that they must leave immediately or he will consider them enemies. If they ask him about an underground tomb, he will not be aware of any but he does know of some “Holes in the earth where smaller creatures are known to scurry about.”

He informs the group of 3 possible sites to check out but is unable to say what may occupy the areas. With his directions the group will be able to find all 3 caves in a short matter of time.

Note: without Crusht’s directions the players must explore the mountain range till they stumble over something.

Crusht is on a holy retreat; the mountain range known as the Wrestlers is known to be a holy place where his god may have once lived with his people. He is currently communing with the mountain and wishes no interference from “the small peoples” as he puts it.

He will fight to drive them away but if they attempt to parley he will stop long enough to find out what they wish and to warn them off. Crusht does not wish the party to leave the entire range but he wants them to leave this area because he believes this to be the ancient campsites of his people.

If Crusht is forced into battle he will use boulders for missile weapons and his spells in an offensive manner. If he truly believes he will lose then he will use his travel through stone ability to flee into the mountainside. Later he will heal himself and use spells to spy on the party, then he will summon an elemental and attack them while they are camping-hoping to take them by surprise.

When role-playing Crusht remember that while he can be reasoned with, he tends to make judgments quickly and must then be talked into seeing another side of things. If the players convince him that they mean no harm then he will talk more freely. If they respond to his poor attempts at warning them away, throwing rocks at them, with violence then he will be convinced that they are here to despoil his holy mountain after all.

Crusht carries no treasure with him. He has taken this journey under a vow of hardship and will accept no help or gold from the party.