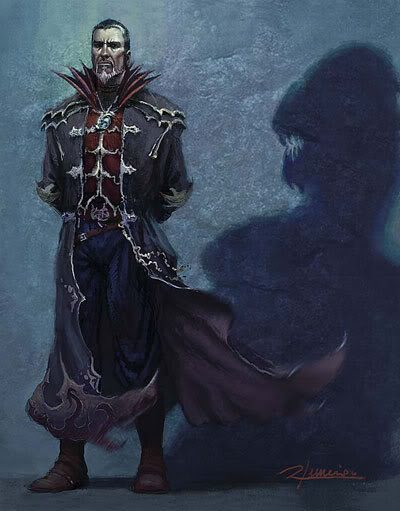 As a young man the town Malchor lived in was devastated by a horrible plague. Malchor himself was stricken and lay ill, unable to move as his entire family died from the disease. Too sick to help himself Malchor ate what little he could find and watched as his neighbors succumbed to the disease or the madness that gripped the city.

Malchor somehow survived the deadly disease but not before having a terrible vision in which he saw an immense figure sitting in judgment over his city. This figure weighed the lives of all who lived there, and many were found wanting. Malchor saw that this figure judged him worthy of life and bringing its judgment to others.

When he awoke Malchor felt better, he began to gradually get back his strength. During his quick recovery a looter came to steal his food and Malchor killed him. His destiny became clear, he was to judge others as he had been judged. He became a priest of this being and began his work to spread its judgment.

Malchor is a fanatic. He works to spread the misery and terror that he believes his god desires. No act is too low because he can justify it. He always looks for converts to his cause, though they must first survive his initiation.

He is currently allied with the mercenary Shar but believes she is too soft to help in his cause. He is a member of “Shar’s Marauders”. When he hears of the Mask of Destiny he will try to gain them for his god (Mask Campaign).