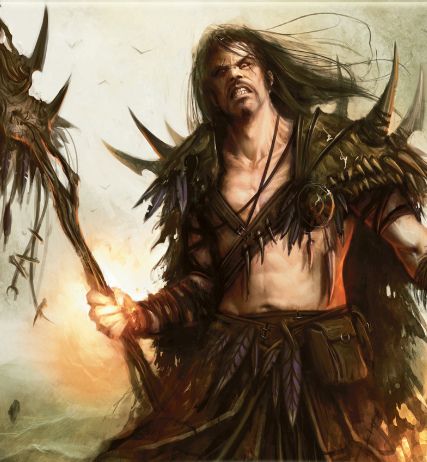 Way back in the beginning times of the barbarians there was a particular shaman who had horrible luck, he went by the name of Hortac. Now one would think it would have been the type of luck that made you lose a few bets, or trip a few times, but this particular curse of bad luck was overwhelming, at one time, Hortac caused his entire village to be burnt to the ground by knocking over a lamp. Anyone and everything he ever came in close contact with, eventually got injured, and sometimes even met their deaths.

As he grew older Hortac could no longer bare the burden of this horrendously horrid luck he wielded, so he sought out advice from the Tribal Council. Now the Council, wanting to be rid of Hortac, suggested that he go off into the mountains and meditate for 30 years, and that this would be the only way to remove the curse.

And so Hortac set out to do just that, he retreated into the mountains along the borders of his tribe and Morkosh, a huge orc empire. Morkosh was a new shining empire that was starting to stretch out over the entire lands, assimilating and taking control of anything and everything that stood in they’re way, but that’s another tale.

In the mountains Hortac stayed, and 30 years later he returned to the city, only to find it devastated by orcish forces, and it had appeared that the fight had just ended, fresh blood leaking from his fallen comrades and orcish soldiers laughing and counting their new hoard of gold and treasures. And so, Hortac, filed with rage from his fallen comrades charged at the legion of soldiers, they numbered over 100. But as he gripped his staff, it began to glow green, and vibrate softly in his hands, and the Luck of dead tribe filled Hortac throughout the entire battle, causing every single attack made against him to magically backfire, sometimes the soldiers even struck down their allies. And after 2 long hours of combat, only Hortac stood, the bodies of many fallen orcish troops at his feet, he had won, thanks to his staff and the spirits of his fallen comrades.

Due to the prolonged battle fought and the wounds taken by the barbarian shaman he collapsed a few minutes after the last orc warrior was slain. He joined his people in the next world with honor and without his curse. Morkosh never came to claim the land fearing it was cursed. Hortac’s staff was left among the slaughter only to be found by a curious elf many years later.

Abilities: The staff is +1 to hit and damage. It also give the wielder damage reduction of 10/+1 and the ability to stay conscious till -10 hit points. The drawback to the staff is that the wielder becomes unaware of damage he has taken in combat. It is only apparent after the wielder is dead.