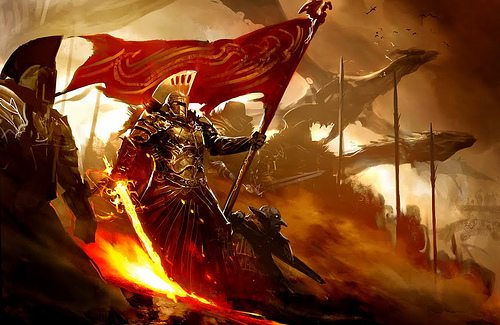 Long before what now is referred to peace, the much of the realm we live in was in utter chaos. The chaos was brought about by a number of events, signs really, that pointed to the coming of a great evil. Through the annals of time heroes have always risen to combat such a great and terrible problem. This time was no different however, all greatness aside one such virus has always plagued heroes.

Overconfidence. A great and mighty paladin came forth with his trusted followers to put evil in it’s place one last and final time. Pity, he was stupid. Although it sounded grand that good shall overcome, stupidity ran amuck as lack of knowledge and underestimating the power of evil overcame the foolish paladin and his troupe. For 500 years we lived in the shadow of evil, no one coming forth to stop it. Kingdoms falling as they sent armies at it by the ten’s of thousands. We hoped and believed that there was a hero out there somewhere who would come and end this. The grand arcane council also believed this and so they created an item in hopes that it would draw out the greatest of remaining heroes. Lucky for us that word spread of this weapon beyond our realms and across the astral plane to a lone swordsman.

He was like nothing we’d never seen before, there was a peace and calmness about him both intriguing and mysterious. He came and asked for the weapon however a test would need to be seen as this was no normal weapon that would to whoever asked for it. 3 hill giants that were kept in prison were told to meet him in the arena and fight him, should you win you go free. Now, I know stories sometimes stretch the truth, but this was the damndest thing I’ve ever seen. In less than 15 seconds the 3 hill giants, who looked like they wanted to fight well laid there in 6 separate humps. All of them being completely cleaved in half. Needless to say the sword has his.

Days, weeks, months followed after our friend went to banish this evil. Still nothing, until one morning the sun shown through for the first time in just over half a millennia. We sent men to the mountain of evil where the evil once lived, all around flowers grew among dead dragons and beasts from other planes. Inside the cave of where the greatest evil lived sat our dead friend with a note written in his own blood. “Evil is gone. Somewhere in some forgotten place here in this world your sword sits, waiting for it’s next weilder.”

Abilities: Flaming upon command, the weapon is sheathed in fire. The fire does not harm the hands that hold the weapon. Flaming weapons deal +1d6 points of bonus fire damage on a successful hit.

Bows, crossbows, and slings so enchanted bestow the fire energy upon their ammunition.

Keen: This enchantment doubles the threat range of a weapon. For instance, if it is placed on a longsword (which has a normal threat range of 19-20), the keen longsword scores a threat on a 17-20. Only slashing weapons can be enchanted to be keen. (If you roll this property randomly for an inappropriate weapon, re-roll.)

Vorpal: This potent and feared enchantment allows the weapon to sever the heads of those it strikes. Upon a successful critical hit, the weapon severs the opponent’s head (if it has one) from its body.

Some creatures, such as many abominations and all oozes, have no heads. Others, such as golems and undead creatures other than vampires, are not affected by the loss of their heads. Most other creatures, however, die when their heads are cut off. The DM may have to make judgment calls about this sword’s effect.

A vorpal weapon must be a slashing weapon. (If you roll this property randomly for an inappropriate weapon, re-roll.)

Sure Strike: A sure striking weapon harms creatures with damage reduction as if it had a +5 enhancement bonus. Bows, crossbows, and slings cannot have the sure striking ability.