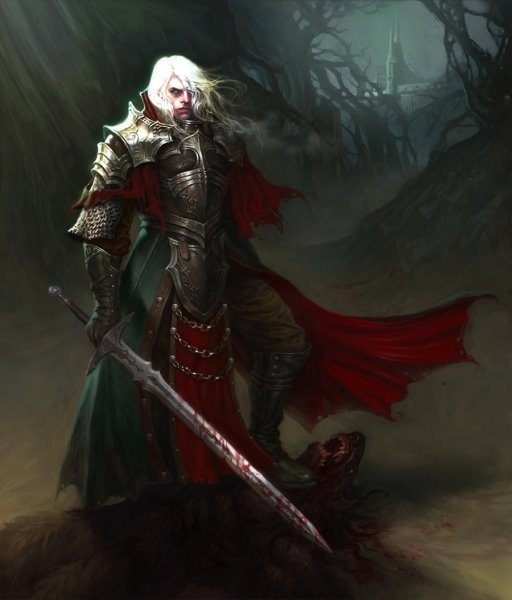 This +1 Keen Scimitar was crafted by Han Menlaseron, a noted Planewalker of Malvinas, to deal with slippery enemies. The blade is crafted of Esdraelite iron and bears the mark of Ealedon the smith, warrior, and holy man who later rebult the great Cathedral of Morhandt the Bloody-Handed in Jezrael. Set in the hilt is a large rose quartz, and the hilt itself is wrapped in a scrap of the blood-soaked shirt his sister, Ja’den Menlaseron, was wearing when she was murdered by Caern the Black.

Han empowered the sword to cut off planar travel as he willed, swearing that no enemy would ever again escape him as Caern had.

Abilities: When the command word ‘Vengeance’ is spoken in Common by the blade’s present owner, the blade is wrapped in baleful red light (Illuminates 10 feet all around) and all creatures within 30 feet of the Red Shear are affected by a Dimensional Anchor effect (DC 19 Will Save to resist). Further, as a side effect of its isolating effect, whenever it strikes an undead creature, a Sever the Tie effect erupts around the wielder (DC 19 Save). The Red Shear can cut Silver Cords on the Astral Plane.