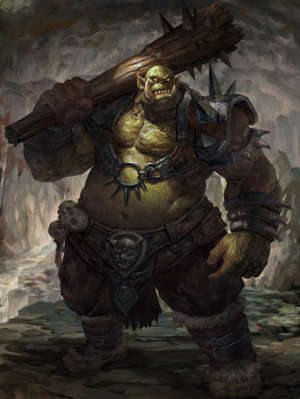 Kuluk, warrior and priest, of the tribe Butklor was their fiercest orc. He fought in all their wars and lead their armies to many victories vs man, elf, dwarf, and humanoid alike. As an intelligent and cunning being he decided his victory and fame earned him the right to rule their tribe, there was no protest. As ruler Kuluk needed now to unite the tribes of the land. Orcs only understood strength and power, so Kuluk did the unthinkable. Kuluk had crafted an item forged to kill others of his kind, other orcs.

Kuluk’s weapon of choice was a giant club. It was a simple weapon that his opponent’s always underestimated. “An orc with a club is a brute, and that’s all” many thought, this was usually their downfall. He had humans craft such a weapon to bring the opposing tribes to their knees. The humans were, of course, delighted to craft a weapon that they can kill their own kind with.

Kuluk used his powerful weapon in battle successfully. He would challenge each leader of the seperate tribes to a one-on-one duel for control of both their tribes. He always offered more than what was offered back, but then again he knew he would always win.

On the eve of Kuluk’s total victory of the last opposing tribe leader a special celebration was held. As an ironic twist of fate while performing a reenactment of the final duel Kuluk, drunk with elf blood wine, trips and falls head first on his club’s spiked head. He hit the weapon so hard a spike from the club pierced his helmut and his skull, effectively leaving him a vegetable.

The tribes quickly fell is disarray with no ruler and conflict for control started again. This eventually left the orc states in worse shape then before Kuluk’s assent. Months of war ensued leaving all the tribes exhausted.

Kuluk’s, and his great weapon, was cast out and dumped in a river as a cursed. Many felt it was the cause of all the tribes demise. Some say it was Grumish himself that cursed Kuluk for creating a weapon to kill his own kind. Some say it was the humans that had planned this and cursed the weapon themselves. All the orcs knew is that they were weak without a leader and prone to attack.

Abilities: Treat Kuluk’s weapon as a great club +2. If the weapon is used against any orc or half-orc it does an additional 1d10 damage. If at any time a 1 is rolled to him, the wielder must roll another d20. Upon another role of 1 the wielder hits himself.