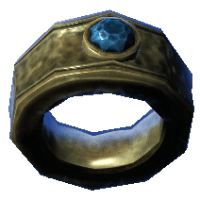 Originally this piece of jewelry made for a knight named Karric. He was an ambitious knight that sought power through any means. The ring was meant as his wedding ring to the princess Perona. This marriage would make him heir to the throne and future ruler of the lands.

He won her hand through a series of competitons with other knights. His competitor’s skills were matched to Karric’s but it was his want that drove him to victory. Even when a match seemed lost Karric managed to pull strength, and will to defeat his opponents with a single blow.

After his marriage to the princess he created an illusion of happiness, charity, and care for the citizens of the lands. Her father, the current king, was in ill health but still ruled the land till his death. Karric’s role was secondary but he knew he had to act his part.

After two years of waiting for the old king to pass of his illnesses Karric became impatient. he had been a pawn long enough. He had the current king have an accident, thus relieving him of his duties. Karric then became king.

A young priest named Tross found the accident unusual and suspicious. Through some divining he discovered that something was not right with the death of the old king. He further investigated to discover the truth. He had also discovered Karric was evil. He came to Perona with this information. Only his priesthood saved him from being placed in the dungeons for treason on the spot. Shocked she still listened to his story after berating him for such accusations.

After some time, together they retraced the steps of what occured. Perona was convinced of her husband’s deed. Her love for him had vanished and she fell in love with Tross. Karric, being intelligent, as well as despotic, began suspecting what was occuring around him. Unknown to him was the fact that by the time he suspected Perona she had already reported to the church about Tross’s findings and backed him. The priests, although surprised at the accusations themselves, also confirmed Tross’s findings and Karric was to be publicly denounced at the next council meeting in week.

Karric had Perona followed for three days before he decided to confront her about her suspicious actions. He followed her to the temple where he believed she was going to advise the priests of his betrayal. When he entered the temple he discovered that she was not there to advise the clerics but to meet with Tross romantically. Karric, although evil, truely loved Perona and flew into a rage at the site of the two. Knew instantly knew why she was there. His rage brought him to kill the two lovers on the spot. This action brought the other priests out from their sleep. They spoke of his treason and asked him to surrender. Karric’s rage could not be kept and he kept slaying. It took over a dozen spells to finally destroy Karric before he kiled all the priests. Only a final spell to strip the life of the warrior had succeeded, but only barely.

Karric’s body was burned with his belongings. His bones, ashes, and possessions were discarded far from the castle in a nearby wasteland. The horror of his presence was removed from the lands and a new king was selected from the remaining relatives.

Unknown to the priests was that Karric’s rage was so strong that his life force refused to die. Upon his soul being stripped away from him he said a prayer to his patron god. His prays were answered but not in the way he hoped. His soul was taken by the god but his hatred and rage contained in the one symbol that betrayed him, his wedding ring.

Abilities: Once a day the ring bestows +4 strength and +4 constitution to the wearer. The drawback is that the wearer must fight to his death. Once all enemies are vanquished he must make a will save (DC 15) to stop fighting or he will continue his attacks on any person within sword’s reach. This save is made each round until it suceeds.