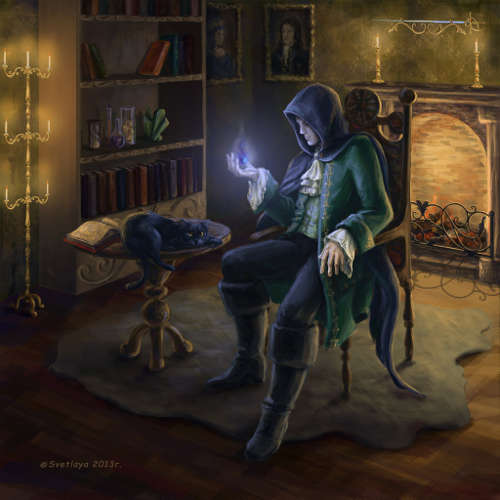 Johandri started as any other wizard did in magic school, curious and wide eyed. He did not make any friends since he was a bit more scrawny then other wizards. He was though, bright and willing to put in the long hours to learn what he had too. In his studied he found a friend in another pupil named Guphs, a good moral person. Johandri’s life was better now. Things would have stayed this way if he and his friend, Guphs, had not come across the amulet of the dead.

This strange two piece amulet, which they purchased for a mere 50 gp., had cryptic runes and magical power within. For a while they tried to decipher its secrets not knowing its true nature. Eventually they gave up at about graduation, split the amulet and went on the adventuring careers.

Several years later Guphs came across an old tome that helped him decipher the amulet’s secrets. He shared the tome with Johandri. Both realized what the amulet was for, necromancy. Johandri wanted it for himself and Guphs wanted it destroyed. Johandri, while trying to steal the amulet from his friend, killed Guphs by accident and got the other half of the amulet.

Now Johandri spends his days looking for the 3rd and final piece to the amulet, an inlaid gemstone. With this piece the amulets full power can be used.

Personality: Johandri’s motivations are to get the whole amulet, he wants it bad. He wants to punish all those who made fun of him in school before he met Guphs. He feels they are responsible for Guphs death, not him. Those people made him go to the extreme.

He is selfish and not too social. He enjoys the company of his pets more than a real person. One day he aspires to be a lich, the most powerful being in the universe. Well this is in his well imaginative eyes. Play him smart but a bit impatient. He usually works at night and doesn’t like to be noticed. He always has a horde of undead around him. If you give him the amulet remember its power. He will use it to its top limitations.