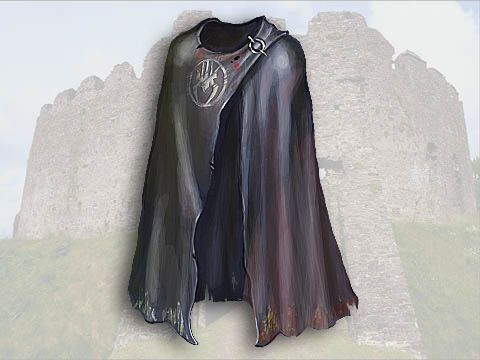 In ancient times a great rivalry occurred between two gods: Fuer, the god of fire, and Drestbush, god of nature. Neither could achieve enough power to overcome the other god through their worshipers and battle.

Fuer, being the less patient of the two, decided to bring the conflict to an end on way or another and send his most powerful priests to destroy the main forest sanctuary of his enemy. A large magical battle ensued between the forces of fire and the forces of nature. The Druids through patience and strategy eventually brought down the priests of Fuer with minimal losses to their forest.

The druids burned the corpses of all the fire priests and wrapped them in the head priest’s cloak. They buried the cloak and the ashes within the forest in a place that Fuer would never find.

Unknown to the druids Fuer placed a powerful magic spell on the cloak knowing that there was a possibility of his followers losing the climatic battle. In the middle of the night of Drestbush’s most holy day Fuer used the last remaining of his powers and ignited the cloak. The cloak consumed the ashes of the deceased along with their fanaticism and rage. The cloak rose from the ground as an enormous fire elemental with the hand of Fuer guiding it. Within hours Fuer burned down the forest and destroyed his hated foes greatest temple and priests. The druids could not wake the power of their god in time to aid them as it was his time to sleep.

Fuer consumed his own fire in his revenge toward destroying his adversary. Both gods now are nothing more than forgotten gods that no one follows ever trying to gain back their presence in the world of man.

Abilities: The cloak is only able to be adorned by a non good aligned priest who’s sphere is fire. While worn the cloak will give the wearer a +5 deflection bonus to their AC. The wearer also takes 1/4 damage from all fire attacks. If however, the wearer would ever die from a fire attack without the cloak’s protection they will be marked by a sever fire scar somewhere on their body. This is a sign from Fuer that says he has once again saved your life. Since the cloak was created by Fuer it will slowly alter the will of the priest wearing it to his religion, thus starting the new cult of Fuer.

Creation: This item is unique and may not be made.