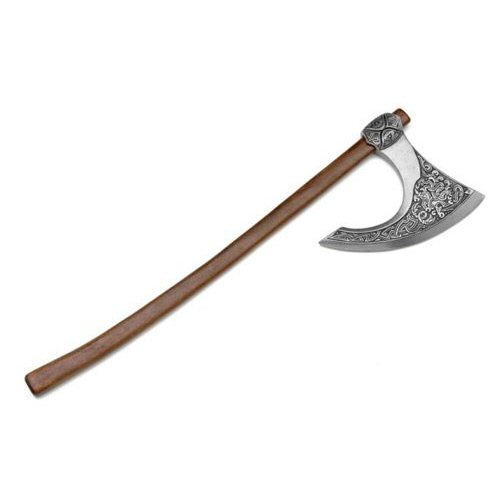 In life Derelorn was a simple woodsman who sought neither glory not recognition. He was denied that simple life when the settlement he lived in came under attack. The settlement was on the outskirts of the kingdom so imperial patrols were rare. When the settlement came under constant raids by a powerful orc tribe the decision had to be made to run or fight. Derelorn himself suggested leaving but his wife’s family members called his decision cowardly. They chose to stay and defend their homes and farms. Derelorn stayed behind shamed and shunned. The orcs came, but in greater numbers than expected. Farms were torched and families killed. Seeing the slaughter, Derelorn began to feel guilty and the weight of his shame became unbearable.

Grabbing his axe, Derelorn ran to defend the homesteads of those who had shunned him. He fought with the fury of a mad demon saving many that day until finally he was killed when 10 orcs hauled him to the ground and planted a dagger through his heart. Derelon’s axe was taken as a trophy by an orc in the tribe who respected the power of such an enemy. Later, the orc who took the axe was gripped with wild emotions and killed several members of his own tribe before being killed himself. The axe was thought to be cursed by the dead woodsman’s spirit so the orcs sent the runt of the tribe, who had run in battle, to get rid of it. The cowardly orc left the village but when the axe tried to communicate with him he threw it away in fear.

Abilities: Derelorn is a +1/+1 (+2/+2 vs. orcs) magical woodsman axe, use battleaxe or two-handed axe. It has an INT of 10, and an EGO of 5. It possesses the powers to detect orcs within 100′ feet of its wielder. 1/day it can radiate a fear spell, affecting only orcs, in a 50′ radius. It cannot communicate but is able to make its feelings known through empathy, projecting its feelings to the wielder.