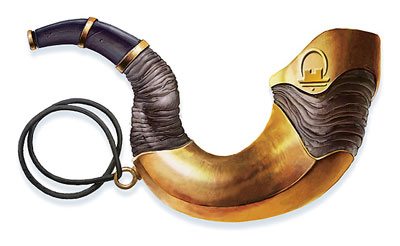 The great humanoid war was a long war and the dwarves finally drove the orc invaders back to their mountain fortress. Even though the orcs were outnumbered, their position and fortifications prevented the dwarves from attacking any further. With time on their side the orcs dug caverns and tunnels, underneath the mountain, to gain allies from the underdark and gather strength. The dwarves needed to breach the fortress quickly and cripple the orcs. The dwarves turned to their most brilliant mind, Fireluck Grimstone for a solution.

Grimestone thus created the his war horn. The horn was made from the tusk of the famous orc warrior and priest, Kuluk. The war horn was meant to strike fear and terror in the hearts of humanoids. Its loud tone deafens any orc or goblin ear that its sound falls upon like the shriek of a dying cat.

Upon its only use ever the horn was blown upon the fortress walls stunning the orcs manning its fortifications and cracking the walls and splintering the main gate. The deafening sound of the horn inspired courage and gave strength to the dwarven army. This gave them the opportunity needed for the dwarves to rush the walls and bring down the gate. After the dwarves were inside the battle became a slaughter as every orc was killed or driven underground. The war had been won at last.

Unfortunately the effect of the horn was so powerful it drained much of its magic rendering the horn useless. It now sits upon the great underground dwarven museum which was buried a long time ago by an unusual natural catastrophe.

Abilities: The horn has been buried for about 300 years or so. During this time its magical powers have slowly gone up. Unknown, even to Grimstone, the horn will regain its full power only after 700 years of non-use. The horn takes time to recover its powers. The horns range is 300′ and affects any dwarf, orc, and goblin within this range.

After 100 years of non-use
Inspire Courage: Any dwarf, within range, gains +1 moral and +1 to hit.

After 200 years
Inspire Courage (as above) and Deafen: Any orc or goblin, within range, becomes dizzy for 5 rounds, -1 to hit and damage.

After 300 years
Deafen (as above) and Inspire Greater Courage: Any dwarf, within range, gains +2 moral and +2 to hit.

After 400 years
Greater Deafen and Inspire Greater Courage (as above): Any orc or goblin, within range, becomes stunned for 3 rounds.

After 500 years
Greater Deafen and Inspire Greater Courage (as above) and act as a Horn of Blasting: The horn also affects wooden structures.

After 700 years
Greater Deafen and Inspire Greater Courage (as above) and act as a Greater Horn of Blasting: The horn also affects wooden and stone structures.