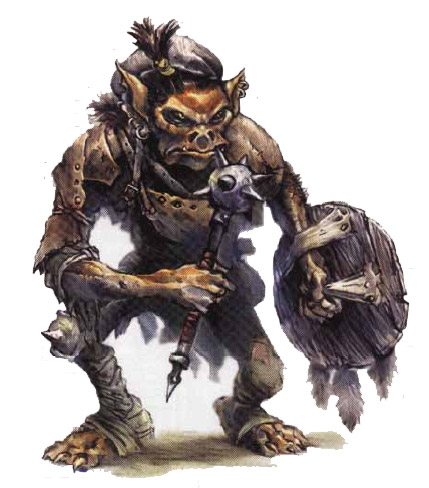 Description: The PC’s were traveling around, looking for abandoned ruins or monasteries to loot, when they come across a village of Gnomes. They are tired, and ask the village chieftan to stay the night, and he agrees. The PC’s stay for two nights and a day, helping tend the crops in the fields, and getting to know the Gnomes, when they are suddenly awoken by one of the Gnomish warriors. He tells the PC’s to come to the village gates, and see somthing. It turns out to be a rogue group of Goblin brigands. The Chief asks the PC’s to help fend them off, and that shall be their act of gratitude!

The town group of Gnome warriors charges into the fields to defeat the Goblins. They gates are left open for the Gnome archers to fire. The Gnome chieftan is also on the battle field, he wields the power of Garl Glittergold!

1st level Gnome warriors (5): all wear a chain shirt, but have the following weapons…
(3) short swords, buckler shields,
(1) hand ax, buckler shield,
(1) Gnome hooked hammer +1[main], punch dagger[offhand] (this Gnome is the sergeant of the town warriors, and he wears scale mail armor, and has 1 poition of cure minor wounds, he is a level 2 warrior, do not make confugurations, just make your best guess at his combat abilities; ex. increase atk bonus by 1, and that’s just about it, except for making his HP go up by about 3-5.

Goblins: The goblins are just a huge gang of thugs, who want some loot, so they decide to ransake the nearest village, belonging to the Gnomes.

1st level Goblin warriors (30): all wear padded armor, and some (randomly) don’t wear any armor at all, because they haven’t stolen any…yet! the rest are equiped as follows…

The Goblins: The leader of the Goblin gang is a HobGoblin, who is a level 1 fighter, with the feat, weapons focus (great sword). He wears hide armor, has 1 javalin +1, which is coated with wyvern venom, which he throws at the fighter of the party, (if there is none, he throws it at the most vulnerable member of the party; ex. a wizard, sorcerer, druid, bard, or rogue, in that order) then, he engages the PC’s and NPC’s with he +1 corrosive great sword, and fights to the death. The leader does not engage in the battle with the goblins, instead, he sits back and waits untill his whole gang is defeated, then gets mad and attacks.
when the PC’s have completed the battle, the Gnome Chieftan, (if dead, he suddenly wakes up, and realizes he was incapacitated during combat), awards each PC with 40 GP, and makes all their weapons +1 for free. If the DM (or GM) desires, the Chieftan’s apprentice (with the same statistics as the Chief himself) will join the party, and adventure with them for a while.

Award each PC 200 XP each for completing the adventure, and an additional 500 XP all the NPC’s (Gnomes) survived, or at least the sergeant and the Chieftan survived (that igves them +300 Xp).