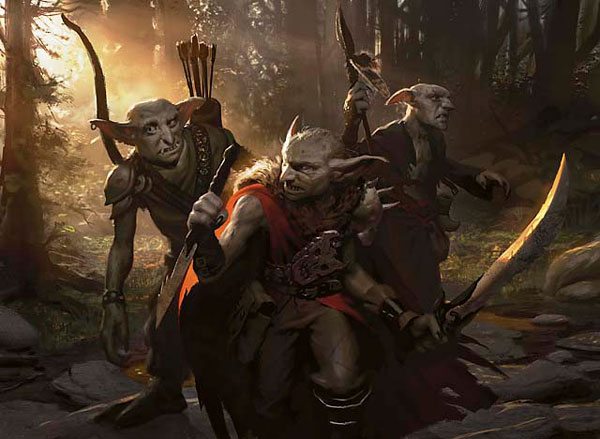 The characters have become the protectors of a ragged group of dwarven refugees. After several hours of travel they will have to set up camp. Find out what methods the characters intend to take to protect themselves and the 20 dwarves, sleeping arrangements, food, cleansing,etc.

6 goblins are waiting a signal from their comrades about 1/2 mile behind the party. 2 goblins will be scouting the party’s area from about 200-300 yards away from the encampment. When they notice the least amount of party members awake, 1 will creep back to alert the others. When they arrive the 6 goblins will attempt to sneak into the players camp. Their method will be to quickly overpower any guard before he/she can call out an alarm. They will then cut the throats of all the dwarves present and quietly leave.

They will of course fail miserably. The PCs may have warning spells up, be faking their sleep, or have 2 or more guards. 6 goblins will prove completely incapable of subduing even 1 PC before he gives an alarm. The goblins will attempt to flee if an alarm is spread but will be unlikely to get far. The 2 scouts will leave and attempt to meet back with the main force to tell of first group’s failure.

No more attacks come that evening but take steps to keep the players on their toes. Odd sounds and rustling bushes, a stressed out dwarf wakes screaming from a nightmare shrieking “THE EYE! THE EYE!” All this should contribute to a feeling of paranoia and a lack of sleep for all party members.

The next day brings the threat of rain. The skies are a constant gray and threaten to pour down at any moment. This continues till noon or so when a powerful downpour sends the party looking for cover. A small overhang provides some small shelter but they must all stand to stay underneath. The rain continues for over an hour. The mood is gloomy, party members and dwarves must stand almost on top of each other to avoid the rain. Through it all the dwarves offer no real complaint, having endured worse over the last several weeks. Any pack animals must be left in the rain unless some magic is used to contain them.

After 45 minutes or so an arrow will come from somewhere in the rain to strike a dwarf chosen at random! 2 goblin archers have found the party. They have hidden themselves amongst some large rocks and with the driving rain are basically invisible to the party. The dwarves will panic and scatter as a second arrow is fired at a random target. The players will have a definite problem, the dwarves are running off into the blinding rain, they cannot see the archers and the overhang makes them sitting ducks. With some work the PCs will find the archers. If approached by party members they will attempt to escape rather than fight.

Note: capturing goblins as prisoners will not help much, the individual groups do not really know what the other groups are planning. They can tell the party that several groups of goblins with worgs were sent ahead of the party and the main war party of about 50 is traveling about 2 days in back of the party.