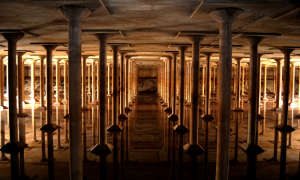 After some discussion the party decided on the breathing tubes as the most workable solution for moving Cary Hebert’s captives through the large cistern beneath the Haleon Baths. They returned to the diving outfitter to have the tubes constructed, and Luce negotiated a reasonable price. The next morning Daniella and Luce once again proceeded to the baths, leaving Crinn outside to await their successful escape with the four captives. As soon as they were in, Daniella and Luce snuck into the storage closet and made their way through the low descending passage, having stowed Luce’s spell components, their length of rope, and the breathing tubes in their Bag of Holding.

Daniella cast a light spell on a towel and on a large stone from the low passage. Luce disrobed and swam throuugh the waters of the tunnel leading into the cistern, leaving the illuminated stone on the tunnel floor and attaching a grappling hook (attached to the rope) in the hinges of the cistern door. Finally she surfaced in the cistern and climbed the ladder to the harem storage closet, where three of the women waited for her. The woman named “Felicia”, however, was nowhere to be found. According to the other women, she was with Cary Hebert in the harem’s main bathing area. The crime boss had gotten drunk the previous evening and stayed all night in the harem, and Felicia could not find a moment to get away.

Frustrated by this news, Lucia focused first on getting the other three women through the cistern. With the aid of the breathing devices and rope, they three women were able to swim the 60 feet through the cistern without too much trouble. When they surfaced back in the tunnel, they informed Daniella of the situation with Felicia, and that Luce had decided to wait it out for an hour or so. Daniella quickly rendered them all invisible and sent them up through the shaft to the Haleon baths storage closet, whereupon they quickly exited the building and found Crinn on the outside. Now Daniella simply had to wait. However, when an hour went by, she started to worry. It was now well past noon, and she feared that they might be discovered if they were to wait much longer. Daniella herself now dove into the waters of the tunnel and made her way through to the cistern on the other side.

After conferring with Luce, the women decided that they would have to send Daniella in, using one of her invisibility spells. For that, however, they would need the wizardress’ spell components, still stowed back in the tunnel. Luce dove in the water and went back to retrieve the spell components with the Bag of Holding. When she returned, Daniella rendered herself invisible and enteted the hall of the harem.

Soon she was able to creep into the bathing area of the harem undetected. There she found three people bathing: Cary Hebert, a blonde woman and a brunette. She waited for some time, hoping for a clue as to which of these women was, in fact, “Felicia”. Soon the brunette woman’s name was used, and Daniella had her answer. She crept behind the crapulous Cary Hebert and cast sleep on him as well as on the blonde woman. Immediately upon casting the spell she became visibile and the duo fell unconscious into the bathwater. Daniella quickly reassured Felicia that she was a friend, and together they moved the body of the blonde woman to the side of the bath, where she lay unconscious. Hebert they left face down in the bath.

As quickly as the could, Daniella and Felicia now returned to the cistern, where they proceeded to swim back through its waters and into the tunnel. Lucia followed but ran into some trouble after unhooking the grappler from the cistern door. As she began to drown, her body floated just in view of the women in the tunnel. They quickly dragged Luce’s limp form out of the water, but now they had a new problem: the lady of Lundy was unconscious.

After some thought, Daniella struck upon the idea of placing Luce’s body in the Bag of Holding rather than try to drag her up through the crawl space. This worked out beautifully, and soon everyone was on the outside of the baths. They quickly made their way to “Hyde’s”, a bar where Crinn’s contact had told him to bring the women once they were freed.

Soon all the women were safely stowed in a secret space beneath the bar, and Kurt Sidney thanked Crinn heartily for his work. Daniella returned to “Correl’s” where she removed Lucia from the Bag of Holding and placed her in her bed. After a couple of hours, Luce revived and was just strong enough to heal herself further. The ordeal in the baths had been harrowing, but thanks to some quick thinking and improvisation by Luce and Daniella, everyone made it out alive.