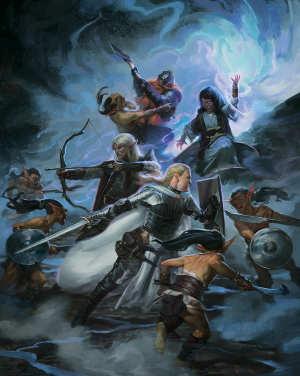 Battlefield Services is a D&D 3E combat board, aimed at helping players visualize combat positions without reams of graph paper and/or expensive miniatures. The program is written in 100% pure Java, meaning that, theoretically, at least, it can be ported to and used on any system with the correct Java compiler.

This current version was written using JDK1.3. Please note that you must have the correct JDK version before attempting to run this program.


This version of Battlefield Services has the following features:

Time allowing, there might be a more advanced version in the future.


The following are known issues and bugs:

Please send notice of any more bugs to sb21@pacific.net.sg. I would greatly appreciate any ideas on solving the abovementioned bugs.


To run Battlefield Services, ensure that your classpath has been properly specified. A simple method of ensuring this is to open up a text editor, and create a new batch file (called setup.bat, in this example), and enter:

This assumes that JDK1.3 was installed into the JDK1.3 directory, of course.

To run the program:


Once the program is run, the main interface is presented.

N.B.: Players are identified uniquely, partially using their name. Make sure that all player names are unique, otherwise, the program treats it as an update instead of an add.

N.B.: Note that to move such a marker, you must click on the exact center of the ellipse. This area is shaded a tad deeper than the rest to make finding it easier. Note also that the current system of adding markers does not scale well. The more markers you have, the slower the program will respond. Again, this is due to the vagaries of interpretive-compiler types like Java.

You can also move markers while showing the move/hustle range. However, in this mode, attempting to move the marker out of the visible range of movement results in an illegal move, and the program ignores you instead.


If a player is carrying a light source, or has an active spell:


The spells, weapons, and magic mishaps are stored in plain, ASCII text files. This means that with any editor, a user can open them up for editing. The files are:

The program will read these using some very strict rules, so any changes must follow according to a pre-defined format. All changes must also take place between the “File Header” and “EOF” lines, with no more carriage returns after the latter.

The file formats are:

Each field in the format must be separated by a tab return.