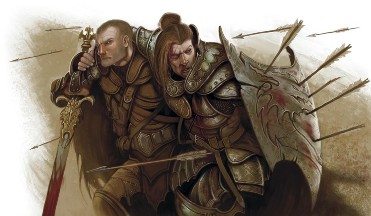 The next morning, Anubis awoke early and sped southward on horseback to reconnoitre the party’s target. Shortly after 8am, he came upon Cary Hebert’s convoy near the Myn Forest, just north of the southern road’s primary fork – eastward towards Bae Cul and southward to Aegis. Ochs unholstered his spyglass and scanned the caravan: they were 25 in number, about what he’d expected, but two vicious looking guards – scaly bipeds with long spears and leathern wings – led the caravan with an air of bravado. They appeared to be some species related to dragons, far smaller than adult members of that race, but still almost twice as large as a man. His scouting trip had been well worth it. Anubis leapt back onto his horse and galloped northward to make his rendezvous with the rest of the group. By 10am, he needed to meet them in their position at Leemingwold Ford.

Meanwhile, Lucia, Crinn, and Daniella all awoke at 8am. The group’s dunnage had been hauled up to Caraviu the evening before; now they just needed to collect their allies and make their way to Leemingwold. They quickly checked out of Correl’s and took a carriage toward Caraviu. Once there, they spoke with Antonio Gennari about their plans for one last time. He wished them luck and optimistically noted that if all went well, the next time the party saw Preen, it would be controlled by a true member of the peerage. They geared up and made southward with their cart and Antonio’s five men, who were doubled up on horses. They joined with Kurt Sidney and his men just south of Caraviu, where the southern road changed from cobblestone to dirt, and continued southward. When they arrived at the ford around 10am, a breathless Anubis Ochs was waiting.

Anubis told the party about the two draconic-looking beasts, but the group was unfazed. They had no choice but to follow through at this point and hope that planning and the element of surprise would win the day. The group took up their positions and waited, doing their best to stay out of sight between the large bolders and trees which surrounded the ford.

Like clockwork, Hebert’s caravan could be seen making its way over the rolling hills at quarter til eleven. The group steeled itself as the fortified convoy crept closer and closer to the ambush point. Finally the sound of hooves and marching boots was palpable and the caravan’s two draconic guards, leading the pack, sniffed their way to the edge of the ford. Not one of the guards spotted them.

But then one of Antonio Gennari’s men, who was standing behind a boulder near the front of the convoy, slipped on some rocks. The pebbles spilled over the river bank and one of the draconic guards almost immediately reared up with his spear and impaled the man, killing him instantly.

With tense twangs and the sound of “sif, sif, sif” the archers on the far side of the river let fly with a volley of arrows. Lucia leapt out of her hiding spot and cast entangle to the rear of the heavy carriage, where most of Hebert’s men were marching. This proved very effective, as most of the men found themselves trapped in the thick vines. Almost simultaneously, Daniella let fly with a darkness spell, severely confusing the two draconic guards and plunging the remaining men at the front of the convoy into utter confusion. It was the beginning of the end of Cary Hebert’s men.

However, despite their confusion, they would not go down without a fight. The horsemen at the front of the pack charged across the river and up the bank on the other side, though Sidney’s riders were waiting there to cut them down. Other men on foot squirted through the trees and boulders on the sides of the road, but they met assailants on every side. Daniella pelted the first draconic guard with magic missiles and Crinn let fly with a number of poisoned arrows from his short bow, eventually killing the beast, but only after he was able to fly towards Crinn and deal a terrible blow with his large spear.

About this time, a stranger appeared on the scene, unseen by anyone. Imranal Toldo, a wood elf of the Myn, had been sent by Hugo Von Staden to find his daughter, whose life he believed to be in danger. Toldo came upon this chaos with great concern, but soon he spotted Lucia. He had seen portraits of the Duke’s daughter and knew her reputation as a wielder of nature’s divine power, so it wasn’t hard to pick her out on the eastern side of the road. Imranal quickly realized which side he should be on and joined the fray with his powerful iron-breaker and skirmishing sword. Together with Anubis Ochs, Imranal helped slay the second draconic guard.

Though the battle was quickly drawing to its conclusion, the party’s allies descended on the remainder of Hebert’s guards, trapped helpless amid the vines of Lucia’s entangle spell. The druidess summoned an eagle which pecked out their eyes, while Sidney’s horsemen rode forth to finish them off. When all was said and done, all of Hebert’s men lay dead, while the party and their allies suffered only one casualty. The ambush had been a stunning success.

Nonetheless, the final slaughter of the trapped men left a bad taste in the mouth of at least one of their number. Despite seeing a great deal of killing in his lifetime, Crinn Scizx was appalled by the final slaughter. His doubts were somewhat ameliorated by what the group found inside the caravan’s large fortified carriage, however. The armored vehicle held a single strongbox, inside of which was a large amethyst on a gold chain and a letter from Cary Hebert’s father to his son. It instructed him to entrap Lucia Von Staden within the precious stone, and then to hand the necklace off to a mysterious personage with the intials “FP”. There was no doubt that these men were on a mission to do harm to Lucia. What’s more, Crinn knew that if the identity of the assailants who destroyed this caravan were known, none of their lives would be worth much in Fribbishire or even Lundy. Thus, despite his doubts, Crinn knew that it was best that no man lived to tell the story of the Hebert caravan’s fate.