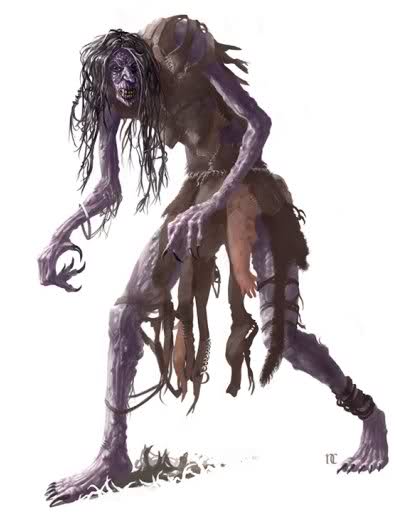 Once the group had felled the ogre, Lucia healed some of the injuries the beast had inflicted on both herself and Daniella. The group proceeded on into the cave from which their foe had emerged, but it contained nothing more than a firepit and some animal carcasses. And so it was on to the second fork of the three. This second passage led on around a corner and emerged into a large, fifteen-foot-wide hall lit on both sides by a number of torch stands. At the end of the hall, Crinn immediately spied an archway covered with a glowing green opaque field. Before the portal stood a waist-high rectangle, apparently some kind of table or altar covered in ivory.

The group approached the altar carefully, and Crinn noted that the floor contained several one-inch grooves, possibly indicative of some kind of pit trap. However, he was unable to find any trigger or mechanism confirming this. At the end of the hall, to the right of the altar, another limestone cavern was visible through an excavated portion of the wall. The hall featured more of the same relief depictions of woodland scenes the group had seen in the first hallway they entered. After some time spent considering the possible uses of the room and the nature of the depictions the group concluded that this hallway, with its ornately carved ceilings and strange altar and portal, was unlike anything they had ever seen before. Lucia concluded that the relief work and decoration struck her as elven, but this was as specific as anyone could get.

Finally, Daniella cast detect magic on the altar, and a strange thing happened. Four lines of runes, written in common, appeared on the top of the object, revealing a riddle of some kind.

PROUNOUNCE MY NAME IN YOUR OWN TONGUE:
A PRISON WITH NEITHER LOCK NOR DOOR
MY INMATES NEVER CHOOSE TO LEAVE
THOUGH I CAN HOLD NONE FOR LONG
WHEN IT IS THEIR TIME TO GO

After wracking their brains for the solution to this riddle and trying many different words, including, ‘the body’, ‘love’, ‘womb’, ‘life’, and many others, the group seemed stumped. And yet Daniella noted that the solution to the puzzle must have to do with the themes of fertility and sexuality so evidently present in the hall’s artwork. Finally, Crinn tried ‘egg’, and upon his pronunciation of the word, the top surface of the altar began to subside, and a strange apparatus emerged from the table. A finely crafted cone about one foot high rose up from inside the altar, topped with a tray that had many letters inscribed on it, each next to a small round groove. This tray was perfectly balanced on the tip of the cone. Beneath the tray and around the cone’s base were an array of finely polished stones, almost like marbles. Each stone appeared to fit perfectly into the grooves on the tray. At the base of the cone’s front side, more runes appeared, this time in the form of a poem.

Exit slumber. Dream no more.
Bereave the silence of her chore.
Breath deep the air, unfurl and roar.
These ancient words of warmth restore
your ember from the darkling hoar.

Maligned by fate, a jealous game
removed you here as from time’s frame,
that you in needful days might claim
a country needful of your flame
and my good offices proclaim
to those who curse my hated name…

These lines jogged Daniella’s memory of a passage of a book she had purchased in Marvey at the magical shop called “Zabreel’s”. The passage was from a text on the myths and legends of the fey peoples of Goin. It told the story of a fairy and a dragon who were deeply in love. Uo took it upon herself, at the request of her daughter, Leda, to bless Krasildor, the dragon, with the ability to go about in the form of a fey creature, such that the pair could consummate their love. From this union, a child was born named Rhaina, half fairy, half dragon. The couple was very happy, but for the fact that a jealous satyr named Loefid was said to have killed the child in its crib before committing suicide.

After much debate, Luce and Daniella speculated that perhaps Rhaina was not killed as the legend told. Perhaps instead the jealous Loefid had found a way to inter the child here in this place. If their guess was right, the round stones must be for the purpose of spelling out the name of Loefid. The poem seemed to indicate that it was the author of the words of the poem that was the solution to the puzzle. Daniella placed the stones, one by one, into the grooved tray, and as she placed each one, first ‘l’, then ‘o’, then ‘e’, the tray did not move out of balance at all.

Finally, the last letter was placed, and many things began to happen at once. The magical green shield faded away, and a huge rush of cold air blew over the party from the room beyond. Just then, Elbereth, one of Ogutu’s men, let out an ear-piercing scream from inside the cavern to the right of the altar. Drops of blood spattered on Crinn’s neck, and the group turned to face a formidable and unknown assailant. As the figure gored Elbereth and sent him flying from the cavern, Luce cast a flare spell on the shadowy figure, thereby dazzling it and illuminating its face. Luce found herself staring at perhaps the most horrifically ugly creature she had ever seen, unmistakably a sea hag. So terrible was the hag’s countenance that Lucia found herself weakened physically by the experience of looking on her. After taking in the sight of the woman’s face, Lucia could not lift her scimitar and had to drop her backpack before backing away from the cave.

Luckily, Daniella, Crinn, and Anubis had all sprung into action. Crinn fired a poisoned arrow at the creature, Daniella fired a magic missile, and Anubis finally felled the witch with a great blow of his falchion, but not before she was able to rake the lieutenant’s midsection with her vicious claws. Luce was able to bring forth a wolf to help finish the job, but the enemy was bisected by the time the wolf could be of aid.

In the hag’s lair, the group found a surprisingly fine shipboard-style vanity, table, and bed. Among the hag’s posessions were a large, strange pearl, a pair of finely laced gloves with real human fingertips on the ends of the fingers, and a fine ring, all of which Lucia discovered to be magical. There was also a fine string of non-magical pearls.

Before the group was ready to leave the cave, they entered the room that had been blocked by the greenish magical shield. Inside they found a creche with a large silver opalescent egg in it. Anubis went to lift the egg, finding it cold to the touch. The group then decided that perhaps the words on the altar outside had some significance, especially the part about “these ancient words of warmth restore”. And so the party chanted the lines of the poem together. The egg immediately became warm to the touch, and Anubis carried it from its creche.

Soon the group was back outside at Ogutu’s camp, where they immediately noticed the sea was roiling and had marched considerably up the beach. They told the captain of their unbelievable time in the cave. Ogutu was sad to have lost three good men, but he was glad the party was able to dispatch the loathsome hag. He was also amazed to see the large egg the group had brought with them (and Fader speculated that it would make a rather large omelette). Everyone retired to their quarters for the night, tired from a hard day’s exploring and from two harrowing fights.

Lucia, Crinn, and Anubis spent the next day exploring the last remaining fork of the cave, a passage that turned out to contain a natural cistern and some small snakes, but nothing more. Meanwhile Daniella was back on the porpoise trying to keep the egg warm and studying the strange artifacts the group had retrieved. The pearl turned out to be for spell-storing, the ring a device which magically increased the jumping abilities of the wearer. Finally, the strange and ghoulish gloves seemed to have the ability to change the wearer’s appearance into the visage of the woman whose fingertips were used to make them.

After a few days, Lucia was back to full strength and the storm appeared to have passed. Ogutu set sail for ports farther up the Bay of Luza River, and the wind was at the back of the Porpoise once again.