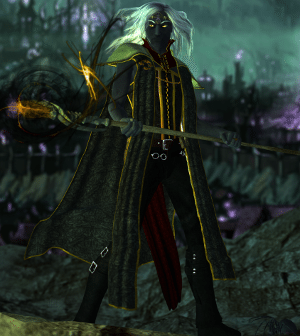 Welcome to The Masks of Destiny campaign for Dungeons and Dragons. This is a set of adventures that is designed to be dropped into any DM’s campaign with little or no effort of restructuring. This campaign comes complete with NPC’s, subplots, new magic items, and monsters to delight and confound your players. This campaign is usable by beginning DM’s as well as veterans who already know how to steal good ideas.

The mask campaign allows you to use the environment as a foe with adventures taking place under water, under ground, and in harsh blizzards. It also takes into account romantic subplots and the development of intrigue and nemesis for the players.

The main magical items in the campaign are the masks themselves, which duplicate the ability of wizard specializations. They allow anyone who bonds with a mask to cast spells and to increase the powers of those who already cast spells.

The plot centers around the arch-magi Xoth who was nearly destroyed by his foes. Xoth’s foes drained his powers into the masks, but they were destroyed themselves. Xoth, reduced to a mere mental essence, seeks to influence others to discover the masks and to bring them closer together, thereby increasing his power. If he can get someone to perform the proper ritual, which supposedly grants one person the powers of all the masks, then he could be reborn into our world with all of the requisite conquering that ultra-powerful wizards are known to do so well.

The masks themselves are not very powerful. Only one person can control the powers of each mask, and the spell which are granted increase with level. Giving the masks to a low-level party would not seriously disrupt game balance. Also, each of the masks, while not intelligent, are aware to different degrees. They may influence bearers and take certain actions on their own.

This campaign is set out in a very linear fashion BUT for a more experienced DM that would not be necessary. Some masks could be discovered by foes while players were retrieving other ones. This campaign merely follows a path that would be the easiest for the DM to use.

This is the first campaign to be detailed on the site and we hope to bring you many more. We will try to do things that will be compatible with all editions of D&D.

Now move on to reading these pages: