Low Magic D&D Made Fun and Easy For Everyone 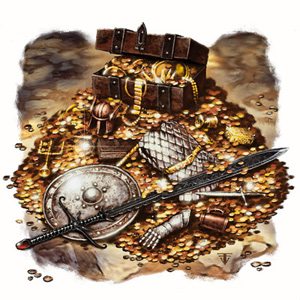 Writer’s note: I see a lot of posts decrying how “high magic” D&D has gotten, with its focus on magic items and player power. And I see even more posts with people decrying DMs who are playing in “low magic” games, only to have the games really be “low magic for the PCs” games. This is intended as a primer, and nowhere near comprehensive, of things I have found that need to change in order to run a proper low magic D&D game.

There are a number of things one must alter in order to run a low-magic D&D game. In no particular order:

• Magic items are not available on any form of open market. One cannot exchange gold pieces for equipment at any point in time. Magic items are the rarest of the rare, and are given as gifts or stolen as booty. Not handled like a commodity.

• Treasure, in general, should be cut in half. Without high market value items to purchase, there is rarely a need for a PC to have more than a few hundred gp at hand. This means that all monsters that generate treasure generate treasure equal to a CR 1 – 5 encounter, except there is no chance for a minor magic item drop. (If this is rolled, simply double the number of “mundane” items available, or substitute it for a masterwork (+1/+2/+3) weapon or armor.)

• By the same token, spellcasters are not freely available to cast whatever spells an individual might wish. If there are spellcasters in a town, they are ½ the level that would be determined by “random population” generation for PC classes (Adepts are fine).

• Due to the lack of magic items, “masterwork” items can be purchased with varying levels of “master-tude”. These are generally divided into masterwork (+1), masterwork (+2), and masterwork (+3). Weapons, like usual, add bonus as an enhancement to attacks (not damage). Armor, as usual, subtract it from their armor check penalties. (Making masterwork armor kind of useless, but then again they already were.) In order for a PC to craft a magic item, they require at least a masterwork (+1) item. This cost should be +1,000 for weapons (+2) and +4,000 for weapons (+3), or +500/+2,000 for armor.

• The crafting feats can continue to exist, however magic item crafting costs twice the amount of XP, and the same amount in materials. For a truly low-magic game, you can have them need to pay the full market value in materials for the item.

• Due to the rarity of spellcasters, should they actually require a spell to be cast on their benefit from a spellslinger-for-hire, the price of the spell will be 1000% normal. (That is, 100 x Spell Level x Caster level, half for a 0th level spell.) Remember that spellcasters will never be available to cast any spells higher than 5th.

• Raise dead and other resurrection magics are not available to anyone and everyone. Not only need the individual provide the cost of the spell (at the improved price, see above) and the cost of the material component (as normal), but a Church will require the raised member to prove their worth by sending them on a quest of some importance to the church or make some worthy donation (such as establishing a parish or shrine, or making a pilgrimage to defend a shrine from sacrilege.) Non-members of the church will require some diplomacy to raise, and will then be given a geas/quest. Remember that due to the limitations on spellcaster limits, only the largest cities or the holiest of temples is likely to have a priest of a high enough level to cast a raise dead. Resurrection and True Resurrection are nigh impossible to find.

• Spellcasters, in general, are mistrusted. Clerics might be less so (though anyone so holy as to call down the power of the gods should be terrifying indeed) but anyone who thinks about setting up shop offering healing for hire will find themselves swamped and overrun (leading to deep questioning from the members of his church.)

• Paladins, and Rangers need be reworked, with the suggestions in Complete Warrior. Other classes are fine. (It’s not a No-magic world, just a low-magic world.)

• A low magic D&D world is a D&D world with a small economy. This is reflected in the fact that monster treasure hordes do not often go beyond the CR 5 range; PCs simply do not need and will not have lots of money to buy things with. The DM should thus reflect this, by making gold pieces rare; hand out most treasure in silver and copper, and all prices are given in silver pieces. Drive the point home that gold pieces (at least, more than a handful of them) are something the average commoner doesn’t ever see in his life. (That doesn’t mean that there aren’t millions of gold pieces available in the world, it simply means that people don’t know about and will never find out about them.)

• All True Dragons have their CR increased by +1.

• All CR 5 creatures of the following type have their CRs increased to 6: Aberration, Constructs, Fey, Monstrous Humanoid, Outsider, Undead. Creatures with the incorporeal subtype also have this increase (non-cumulative.)

• All CR 6 – CR 9 creatures (except those of the Animal type) have their CR increased by 1. These creatures at this point have magical abilities and defenses that make it difficult for the PCs to fight them, and those that don’t tend to have high hit points or natural armor.

• All templates have their CR increased by +1. (There are a few exceptions to this rule, but mostly in non-core/non-SRD cases.)

Some Notes: The most important thing to note is that, short of the limitations on PC equipment choice, no other limitations are placed on the PCs. The PCs can still be spellcasters (see below). All of the limitations are on NPCs, and this is a huge part of making a low magic world run well – too many PCs have had bad experiences with DMs who play “low magic” campaigns where the PCs are stuck being 3rd level commoners facing legions and legions of sorcerers and wizards.

Spellcasters as PCs (Or, Won’t it Unbalance my Game if the PCs are spellcasters?): Spellcaster PCs in a low magic world do not unbalance the game in any way whatsoever. This is for various reasons:
1) Spellcasting PCs face the same limitations that non-spellcasting PCs face. Their equipment, hit points, saves, armor class, etc., will all be the same. Yes, they have spells that have DCs that are harder for NPCs to make, but the number of spells they can cast is limited (even more so, probably, than a standard game, see below) and most creatures they face have already been built to withstand the attacks normally. (Remember, also, that generally speaking NPCs face similar limitations as PCs do, and thus are both on par on a general “Challenge Rating” level, and therefore don’t need their CRs adjusted for the single NPC vs. spellcaster encounter.)
2) Spellcasting PCs will have to spend most of their spells in buffs and other defenses because they don’t have the resources normally available to them, thus granting them less offensive power.

Q: But won’t clerics/druids become even more powerful, since they don’t need equipment?
A: Generally, yes. However, most clerics/druids aren’t working in a vacuum – they have a party to support. And this party now has less by way of resources to survive, thus meaning the cleric will need to spend a lot more spell slots on healing. Alternatively, a cleric/druid who spends all his spells on buffing himself now has less healing to dole out, making it more challenging for the party in general. (In other words, a cleric who does this is putting the entire party in danger, and will probably be kicked out of the party for being selfish.)