Not a Trapped Door 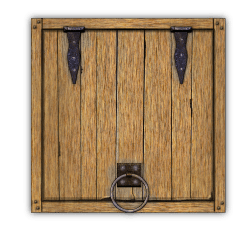 This is a clever little trap that is bound to surprise even the wittiest of players. This may be placed in a room or in any hallway. First thing to note though is that this will not detect as a trap when it is triggered. Think of it as a wizard pointing a wand of fireballs toward his face and activating the wand. Is that a trap? No its stupidity.

Place a large simple trapdoor on the floor with a pull ring on it, perhaps even make it locked by a small bar. The trapdoor opens downward, not up like most do. Tell the PCs that the trapdoor has a “pull” ring on it and watch them struggle to pull something that is suppose to be pushed.

Underneath the trapdoor is a large room, a pet cage you might say. Within the room put an appropriate monster. Monsters should be something that are kept as a large dangerous pet, an umber hulk perhaps.

Logic behind the trap: The owner of the place likes to keep his pets from harming him. He feeds them through the trapdoor. Food will be placed on the trapdoor and they will knock on it so the pet below knows food is topside. Before the pet opens the trapdoor the owner will be far enough away to avoid its reach. If the door pulled up the owner would have to stand there exposing himself to the monsterous pet, and thus putting himself in danger. This is why a “detect traps” spell wont detect it.