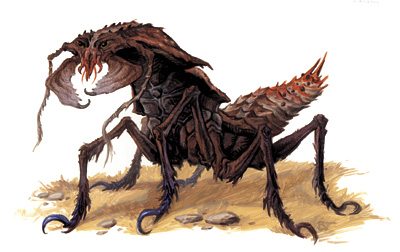 As the party is traveling they come upon a crossroads, and in the middle is a small human child of about 10 years of age, in reality a doppleganger. The boy is is ragged looking and covered with blood, he waves to get the group’s attention, begging them to help save his father who was dragged off.

The boy tells the PC’s that a “large bug about 8′” high grabbed his father as they were heading to market. The boy states he can show the PCs where the bug’s hole is at.

(assuming the party heads that way)

They discover a large hole, about 6′ across, in the ground that drops down about 8′. Inside seems to be a tunnel, 8′ high and 5′ wide, dug out of the earth. A strange sickly sweet smell wafts out at them. The smell is somewhat like bile mixed with molasses, the creatures digestive acid. The boy will insist on following the party. They will, should, tell him no because he is a small child.. Eventually he will pout and finally agree.

The tunnel goes only a short distance of 30′ before coming to a 15′ drop into a dug out and unlit chamber. With light the party sees a huge bug like creature, an anhkeg, with a human gripped in its forepaws. It has just vomited digestive juices onto the smoking dissolving corpse. When the light hits it, it roars with fury, turns and burrows into the floor. The players have 1 round to prepare then it emerges from underneath them to attack!

The anhkeg might, if you need to be lenient, have used up its acid already on the farmer. The creature will not retreat from a battle in its lair though it will pull back to attack from surprise if that is possible.

Once it is dead, the party will want to investigate the creature’s lair. The farmer is almost beyond even a burial he is so melted, other animal corpses lie nearby also. The only treasure in the chamber are those things un-melted from the digestive acid.

Treasure: +1 chainmail, a glass vial containing a potion of healing, a hunk of partially melted gold pieces (possibly worth about 45 gp. with effort).

While the party is searching the room the little boy will appear at the edge of the tunnel and ask after his father. When the party replies that he did not make it, the boy states “Oh well, he wasn’t very nice anyway. Perhaps I will just play with you!” The boy changes form to frighten the wounded party and attacks.