Masks of Destiny Campaign – Chapter 11b: The Moaning Forest 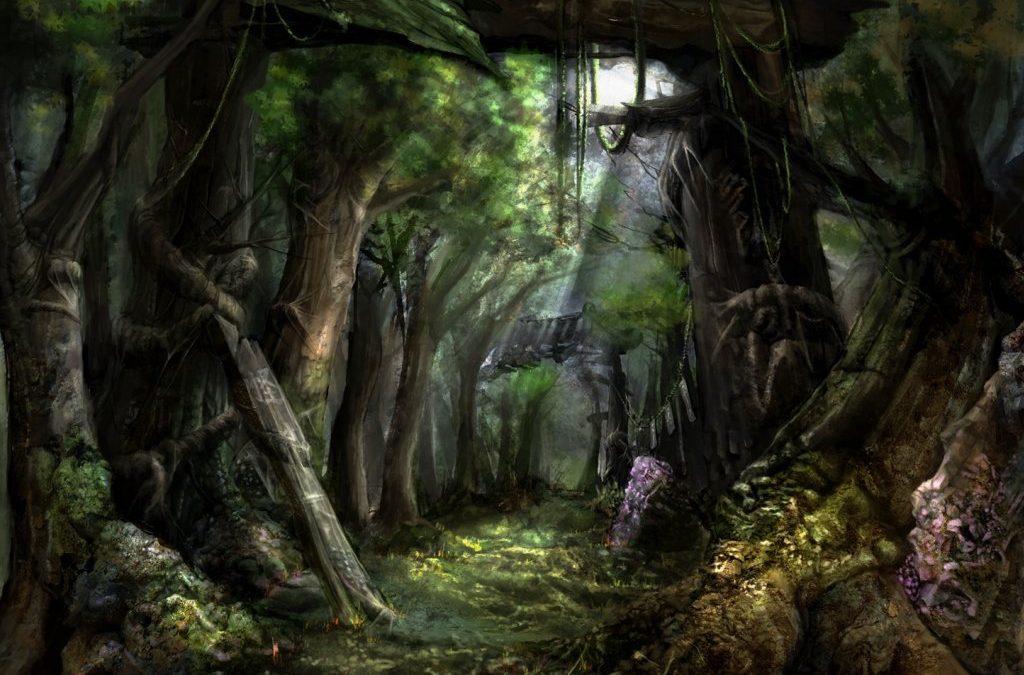 After the party gets rested and resupplied the will set out for the dig site. Omar will lead them there and offer to hold camp while they explore the dig site. Along the travels to the dig site and through The Moaning Forest Omar will further advise on the setup of the dig site camp, soldiers, workers and the patrols to better prepare the party for any encounters.

Passing through the forest will be not be a problem for the PCs but as the name implies the forest generates many disturbing and unusual sounds. Every night the winds may change (d6: 1-2 not windy, 3-4 moderately windy, 5-6 very windy). On moderately windy nights or very windy nights the trees will resonate a low sound with each breeze that passed through their trunks, or moan as the forest implies. If the party starts a fire it has a 3 in 6 chance of attracting curious forest animals. They will not attack but should be used to put a bit of fear on the party as the animals will watch from a safe distance moving around stepping on branches or dry leaves. If the party members go to sleep one of the animals will try to steal food from the camp, MM 193 3E. Party members can detect the approach of the animals by making a listen check (Non windy nights, DC 10, windy nights, DC 15, very windy nights DC 20). It should take about 5 days to traverse the shady forest to the dig site.

On the 3rd night after a long day the party members will encounter a very beautiful grove clearing in the middle of the forest that they may camp at. It is a heavily wooded area that is not noticable unless you approach it from the entrance. Each PC only needs to make a spot check of DC 5 to notice the entrance. Once found by a PC Omar will exclaim “I must have not noticed this grove before when I passed here, it looks like a good spot to camp” He will walk around it some at state how well hidden it is from the rest of the forest. Inside the trees and branches cover 90% of the sky. There are fruit plants and a small clear pond with some small fish (11′ x 8′) fed from a nearby stream. The ground is made of soft grass and very comfortable to lie in. A druid would find this place very comforting. Any druid or ranger will be able to tell that the water is clean and the fruits are edible.

The reason why this place is such a paradise is that the trees above are in habited by an intelligent huge Assassin Vine (see below) MM 20 3E. The vine was placed here by an evil druid name Norex of the Black Ivy many decades ago. Norex found the Moaning Forest the perfect place to hide from the world of others. Any intrusion by outsiders into the forest would dealt with by Norex, permanently. Over years of staying in the forest Norex developed a spell to alter the nature of the moaning trees that inhabited the forest. He used this spell to alter the tree’s trunk cavity so it would moan louder and keep others out. He also planted more and more of the altered trees to increase the forest’s reputation.

Norex made the mistake of killing the son of a noble that was in the forest with his friends. They were doing what boys do, hanging from the trees, playing, laughing, breaking branches for pretend sword fights. Some of the kids got away and told the lord of the land what had happened. The next day a group of nobles (warriers and wizards) searched the forest for the one responsible. They fought Norex over 4 days within the forest before eventually discovering his grove. Here Norex made his final stand and lost. His body slain, Norex’s spirit went into the assassin vine in the grove.

The nobles believeing that with the druid dead that all was safe slept in the grove that night. Needless to say they never woke up. Each noble strangled by the assassin vine as they slept. Killed by Norex, ever imprisoned in the assassin vine but aware of all around him.

The assassin vine will only attack when the party goes to sleep. It will strike those on watch first trying to strangle them so they won’t scream. Sleeping pary members must make a listen check of DC 20 to wake up from the noise. If the strangled person manages to make some sort of loud noise while held the players may add a +6 circumstance modifier to their roll each round to wake up. If the assassin vine is killed the spirit of Norex will appear for 1 minute floating over the party enraged and twisted. Being part of the plant has made him mad over the years and only fueled his hatred for others. After a minute he will disappear. He does not attack nor can he be destroyed.

If the party digs deep enough (8 feet) in the grove grass they will find remains of animals and of the party of nobles. A jewel encrusted silver longsword will be found bearing the crest of the noble house that rules the land. If this is returned to the proper lords the PCs will be rewarded 1000 gp.