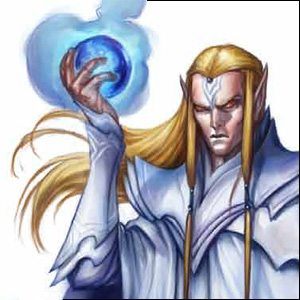 Background: Naxar Moonsorrow is unlike many other Eladrin, and any eladrin in the party who encounter him will be sure to tell this to the others. Naxar has been swayed by promises of dark power and has achieved it somewhat.

Naxar stands tall for an Eladrin, and is exceptionally gaunt and pale, his hair is slick and black and sticks to his face with sweat during a battle. His robes, not the healthy bright colours of Eladrin dress, are black decorated with silver and purple skulls, however, his most distinguishing feature are his eyes, pure black.

The PC’s may encounter Naxar as he experiments in the heart of a dungeon, if so, perhaps the dungeon before his encounter is littered with skeletons of destroyed creatures, yet each different monster skeleton is missing some vital bones. Naxar could be found in a room near the end whilst attempting dark magic, and after the battle the PC’s could discover the skeleton before him is a compound of those of the monsters they found dead before discovering his experiment room (Or, perhaps a strange creature could be discovered later on as a solo).

Naxar will not surrender, although he may attempt an escape with his expeditious retreat and fey step powers if you would like him to become a recurring villain. Naxar always begins combat summoning several undead minions to thwart the PC’s, and He will spend the combat using his area of effect spells to hamper the PC’s and attempt to kill them, all the while promising them their deaths, and filling them in on the gruesome details of how he will use their bodies when they finally succumb to his arcane might….