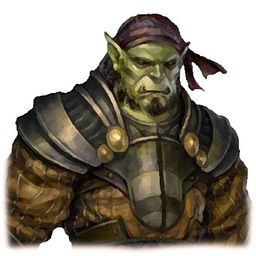 Tusker is a half-orc male. He was raised by his human mother. His mother never spoke of his father or the incidents of his birth. He grew up loved by his mother but unaccepted by her family or the local community. He is determined to find his place in human society, he considers himself a nonviolent individual but realizes he has greater physical strength than most most people.

Tusker served as an apprentice blacksmith for a short time so he has skills relating to that profession. He has picked up hand-to-hand fighting skills from fighting the bullies who always made him a target. He has of late enlisted in a small mercenary unit and been trained in the formal skills of a warrior. Though he wonders if he is suited for such a profession, or if it can help him gain acceptance.