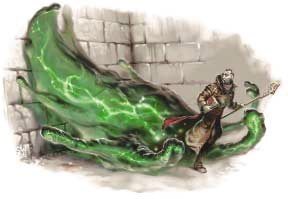 Molds are a variety of spore-producing fungi that form in decaying food or in warm, moist places. These fungi usually have a woolly or furry texture. While most molds are harmless, there are at least three varieties of monstrous molds that pose a deadly threat to adventurers: brown, russet, and yellow mold.

Brown Mold: Brown mold is found in damp subterranean areas, such as caverns and caves. It is light to golden brown in color. Brown mold feeds by absorbing heat, even body heat; where brown mold grows, the temperature is below average. Direct sunlight or ultraviolet light kills it.

If a warm-blooded creature comes within 5 feet of a brown mold, the mold drains heat equal to 1d6 points of CON from its victim, per round. The drain lasts for 1 hour. A ring of warmth provides complete protection against this attack. Brown mold grows instantly from heat. If a torch is used in its vicinity, it doubles in size; if flaming oil is used, it quadruples, and fireball-type spells cause it to grow eight-fold.

Brown mold is not fed by cold light sources (e.g., light, faerie fire). The only magic that affects it are disintegrate (which destroys it), plant-affecting magic, and cold spells. Ice storms or walls of ice cause it to go dormant for 5d6 turns. A cold wand, white dragon breath, or a cone of cold kills it. Brown mold does not affect cold-using creatures such as white dragons, winter wolves, ice toads, etc.

Russet Mold: Russet mold is golden-brown to rust red in color. It has a lumpy texture similar to cold porridge; it is covered by short, hair-like growths that stand upright and wave as if they were in a cold breeze. It resembles rust at distances beyond 30 feet (DC 15 spot to recognize it is not rust). It is immune to weapons and most spells; it is affected only by alcohol, acid, and salt, which kill it; a cure disease or a continual light spell also destroys it.

Russet mold continuously emits a cloud of spores in a three-foot radius. All creatures in this cloud suffer 5d4 points of damage (per round in the cloud) and must roll a successful saving throw vs. fortitude (DC 15) or become infected with spore sickness. Victims of spore sickness are paralyzed within 1-3 minutes and die within 10 minutes unless a cure disease spell is cast on them.

Anyone who dies from spore sickness undergoes a transformation and begins to sprout russet mold growths; when completely covered in mold (1d4+20 hours), he becomes a mold man or vegepygmy. A hold plant spell will halt the growth of the mold for the duration of the spell, while a cure disease spell destroys it within an hour after death; after that, a wish is necessary to destroy it.

Yellow Mold: This mold is pale yellow to golden orange in color. If touched roughly, it may (50% chance) emit a cloud of spores in a 10-foot radius. Any creature caught in this cloud must roll a successful saving throw vs. fortidute (DC 20) or die. A cure disease spell and a resurrection spell within 24 hours are necessary to restore life. Fire of any sort destroys yellow mold. A continual light spell renders it dormant for 2d6 turns.

Yellow mold colonies of over 300 square feet are sometimes sentient (1 in 6 chance). These molds sense creatures within 60 feet, and may project their spores that distance. Twice per day, they may use a suggestion on someone within that radius; in addition to a willpoer save (DC 13), the victim must successfully roll an Intelligence check or lose 1 point of Intelligence permanently (it is devoured by the mold).

Check out RPGAlchemy.com for cool D&D plot ideas and guides.

Get free chips when you redeem the no deposit bonus codes at BonusPromoCode.com.