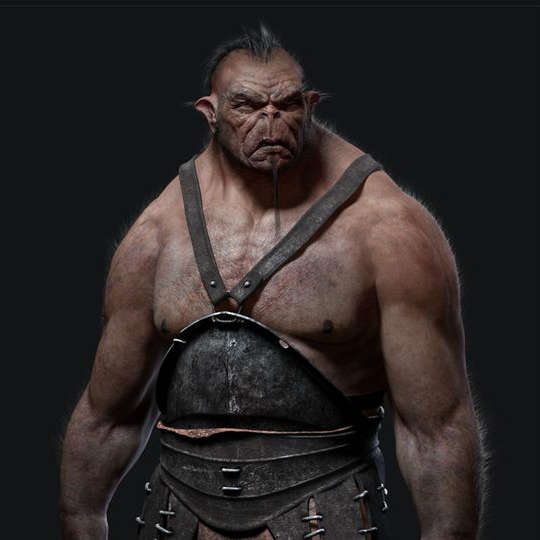 Note: * for 2E his strength and con are 19 and he fights normally in daylight.

Brezcar’s mother was something of a trouble maker. She had 4 husbands across 3 tribes and had them all under her thumb, pretty impressive for a female orc. Each husband was of a different breed of humanoid. Luckily for her each died in combat at the same battle, on the same day, before they found out of each other. Shortly there after Brezcar was born but from which father she not knew.

Brezcar turned out to be the ugliest humanoid that one can ever lay eyes on. He is a mix breed of orc and something else, an ogre most think. He is large, bulky, strong, and bright for an orc, very bright. One might figure he is half-ogre or half-bugbear with a bit of the goblin cunning. Although the one thing that makes him really different from other humanoids is that he’s chicken.

Brezcar doesn’t like to get hurt and doesn’t like to get hit. After one critical hit he will run from battle leaving comrades to die. He is smart enough to talk his way out of his cowardliness afterwards, as he has to explain to the chiefs why he is always the only survivor after any failed raids. The chiefs like him though, because he usually is successful and comes back with goodies and less dead orcs.

He is usually in charge of raiding parties and is pretty adept at planning strategy. His real goal in life is to be an orc general, that way he commands but doesn’t fight in any way. He knows he will have to bring many a successful raid to gain the total trust of the chiefs. Play him smart, cunning, and goal oriented. He does not contain that orc aggressiveness that most of his kin have and he speaks 5 fluent languages: elven, dwarven, common, ogre, and giant.

He has got a coolness about him that only falters when his life is threatened. He will usually stay back or fight the weaker opponents. If he starts losing or is seriously hurt by a blow he will run. To get away if followed he will use his potion of invisibility.