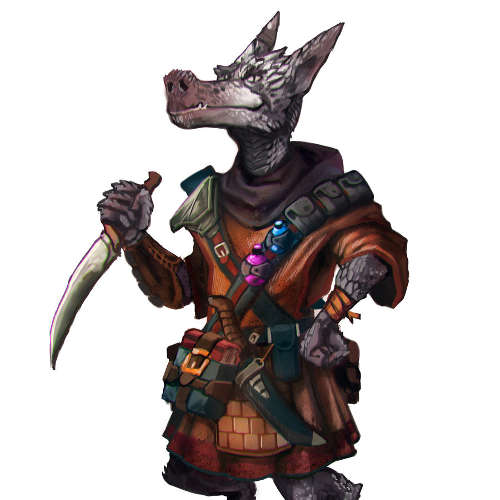 Tuff-Nik’s role in the kobold group is to set traps for foes and help out during a battle. In combat he will skulk around and throw daggers before running in to stab unwary foes in the back. It is likely the party will meet Tuff-Nik for the first time in a battle. Tuff-Nik will take part in a battle until he is bloodied or if more than half of his allies have fallen. He will then leave and find somewhere to hide (this is applicable whether he fights with his original kobold allies or the adventurer’s, although he will always return a while after the battle if there are survivors on his side). If the PC’s don’t notice him leave the battlefield or fail to find him in the surrounding area (Tuff-Nik will not attack a searching PC, he is far too cowardly, he will however simply hide and hope the PC’s don’t find him) he will follow the PC’s after the battle. They may begin to notice things going missing after resting or someone may catch him attempting to steal food at some point. Tuff-Nik will barter anything to save his cowardly skin, and a captured Tuff-Nik will attempt to ally with the party, filling their heads with lies if it seems it’ll make things better, however in reality he sides with no one, and will leave the PC’s at any point to save himself.