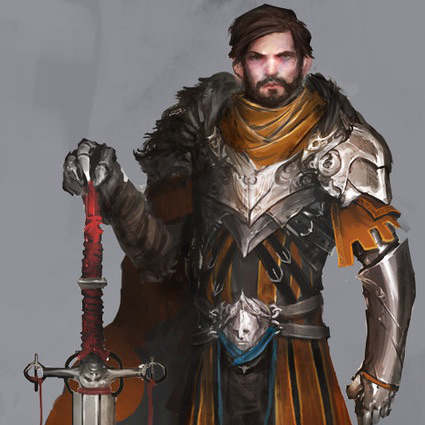 Background: Kelras Thallan is a pious adventurer, boldly wandering the horizon alone but for the guidance of Avandra. Kelras can be introduced to the party as an ally, he is especially helpful if your party lacks a defender or leader, He can also turn up if things begin to take a sour turn in an early encounter of your adventure, if you accidentally make an encounter too powerful and the PC’s start to fall. In such a case, you might introduce him by reading this passage when his initiative rolls around.

If Kelras appears to aid the PC’s during combat, he will likely issue a Divine challenge and use his Daily power, before stepping forward to engage the enemy with his melee attacks. He can use Avandra’s Rescue during a battle to swap places with a PC in danger, and can apply healing to such a PC with Lay on Hands. At the start of an encounter where the PC’s are safe (such as if he were adventuring with them), he would use his half-elf racial power Eyebite, as well as issuing a Divine challenge, before engaging in melee.

Kelras Thallan is a half-elf paladin of Avandra, currently without a party to adventure with. His armour is made of cobbled together pieces of scale male, obviously from different suits. The large steel shield he carries is the finest piece of armour he wears, and is stamped with the Three Waves symbol of Avandra. He also carries an amulet stamped with her symbol around his neck. He stands tall and proud, with short cut blonde hair and shining green eyes.

He is rather handsome, with high cheekbones and a stunning smile, and somehow makes the shabby armour look extremely presentable. His manner is relaxed and he is prone to smiling, making you feel relaxed in his presence however he takes on a much more interested attitude should the conversation turn to adventure. He gets a little agitated if told to wait for too long, although he suppresses this should there be an emergency (such as during a ritual to heal someone) but he will be found constantly looking at the door during these times, and resents staying in one room for too long inside a dungeon. He brings his approach to adventure to the battlefield, and relishes the chance to prove his aptitude in combat. Kelras is wholly good, and doesn’t agree with capturing any hostile people, preferring merely to set them free should they surrender. If the party performs any conduct that could be conceived of as evil, or captures any enemy against Kelras’s will, he will simply leave the party without a grudge, hoping to meet again and find a time to exchange stories.