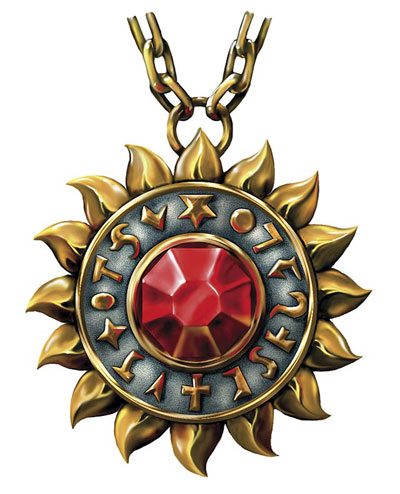 A tool made by a priest and theif named Rezlin. It was used to save himself on dangerous treks to the vaults of rich wizards. Finally caught, or should we say polymorphed, his captor found a use for the lovely necklace in years passing. Eventually it was sold.

Abilities: This large necklace has a circular, gold medallion that hangs from a golden chain. The medallion is inset with 1d4+1 tiny emeralds and has a detachable medium sized emerald in the center. If the medium gem is placed on the ground and the command word is uttered the wearer of the necklace is transported to the spot where the gem was placed. But each time the ability is activated, one of the tiny emeralds disappears. Once all of the tiny emeralds are gone, the necklace becomes non-magical and is worth about 500 gp.