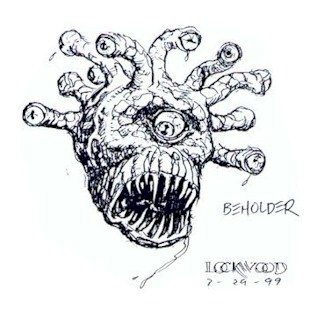 Beholders, nasty, mean, ugly, a party killer right? Well maybe not. I got an email the other day that needed some help.

What traps, tricks, and tactics would you use to make a Beholder a more memorable encounter? How would you design its lair to take advantage of its strengths (those eye beams) and minimize its weaknesses (slow movement)? In too many adventures Beholders are supposed to be simply waiting around for a group of adventures to sneak up and attack it.

Always remember that beholders are intelligent and can come in groups or use other beings. Some ideas to use are the following…

For starters you can place the Beholder in an area with a high ceiling. Then the little fellow can fly upside down up near the top blasting at the PCs with his beams. Of course he is about 20′-25′ up or more so fighters can’t really hit him well.

Have the beholder use ogres, or some other big dumb strong creature, to fight the PCs while it stays back and uses its anti-magic ray to disrupt spell casting and those nasty magical weapons fighters use. Only when the henchman are dead or just about dead would he drop the field and begin blasting.

With 3E its easier to charm a fighter with an eye and have him beat the snot out of everybody. Use other eyes to disrupt surroundings, for example disintegrate the roof causing a cave in.

Add a room with plenty of mirrors to bounce those colorful beams at different angles. All the while the small round fellow can hide among the mirrors giving the appearance of many Eye Tyrants.

Mix him up with some gas spores, have him maneuver around them constantly taking pot shots with his eyes. “Will the real beholder please stand up…”

Make him tiny in size from some curse or magical effect, more AC equals harder to hit.

Last and most interesting is to alter the eye stalk’s powers. Replace the beams with other spell effects like prismatic spray, mirror image, fear, curing spells, illusion spell effects, or any other magic that would challenge the party.

Who says you can’t teach an old Beholder new tricks. Try it and watch the look of confusion in the PC’s eyes. Perhaps those high level characters will again have some respect for the Eye Tyrant.